I’ve been feeling really lousy lately. So lousy that I’ve Googling things like “thyroid disorder,” “diabetes,” “menopause,” and “ovarian cancer” (which, by the way, seems to fit my symptoms most closely of all the Googled disorders).

I considered whether all of this was just a sign that my endometriosis was back with a vengeance. I thought at best my hormones were off kilter and at worst I had a deadly disease.

I was ready to make an appointment with my gynecologist, but I realized that since my period was about five days late they would probably ask if I could be pregnant. Who wants to delay treatment for a deadly disease by waiting for the results of a pregnancy test that couldn’t possibly be positive?!

By now, you can probably guess where this is going … 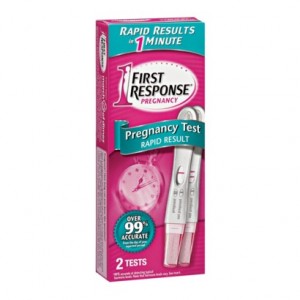 Moxie and I strolled the aisles at Target last Tuesday morning, picking up this and that (including a pregnancy test) before we ran through the drive-through at Chick-Fil-A to pick up lunch for Mojo.

We had lunch with him at his school, hung out on the playground for a while and then headed home. My plan was to take the pregnancy test and then hustle Moxie upstairs for a nap. I could check the [negative] result after I ushered her off to dreamland and then I could call the doctor before hunkering down with my laptop to meet some upcoming deadlines.

The reality, though, was that two pink lines appeared immediately. And I lost my mind.

I couldn’t reach my husband (which was probably a good thing because all that freaking out would have undoubtedly been contagious) but I called a couple of friends for support (Thanks guys! Although my question about whether you could have a positive test with no actual pregnancy would probably best have gone unanswered. Uterine cancer as a cause for a false positive added slightly to my anxiety.). When I was a tad calmer, I took a second test … still two pink lines.

The next morning, I went to my doctor for a blood test … and the day after that the nurse called to tell me that my HCG levels indicate that I’m probably around 7 weeks pregnant. If you’re noting here that my period was only five days late, yes – that does mean I had an actual honest-to-goodness period between the time those numbers say I would have conceived and now. I cannot explain.

Also, remember me? I’m the one that required almost three years of concerted effort to get pregnant with Moxie. To say I’m surprised by all this would be like saying Hitler was mean. What an understatement!

For weeks, I’ve gone about my business as a normal old (did I mention that I’m 41?) non-pregnant lady, enjoying margaritas with my girlfriends and an occasional glass of wine at home, helping people move big hulking mattresses and who knows what else that I can’t even remember.

I’m reticent about the challenges of having three kids, not to mention having to buy a new car – one big enough for so many car seats – and stacking my kids in our three-bedroom home and all the logistics that go along with all of this, but my primary concern is that this little surprise is safe and healthy.

My first doctor’s appointment is next Friday, and I’m told I can expect an ultrasound to check things out. If you have any good thoughts or prayers, please send them my way. I’m gonna need them!!! 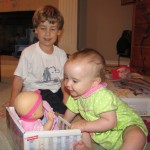 Kim Blakely is mom to a 2-year-old  girl “Moxie” and 5-year-old boy “Mojo”. She’s also a freelance writer who works from home.  To read previous All Akimbo posts, click here!