15 “Assuredly, I say to you, whoever does not receive the kingdom of God as a little child will by no means enter it.” Mark 10:15 (NKJV)

I have wonderful memories of the congregation I grew up in. It was large in love, although not large in number. One thing’s for certain, though. If you’re growing up in a church with only a handful of kids, you’re guaranteed to land a part in the annual Christmas program. Such was my fate.

The Christmas I turned fourteen (and Gwen Rule Rockwood was two-and-a-half) I was again cast in a supporting role in the Yuletime pageant. And I made up my mind that my life was about to change. I decided I had completed my fair share of Christmas programs and that they would have to find someone else to help reenact that year’s rendition of the Holy Nativity. I was too old for such childishness. My Christmas program days were over. I would never be in a Christmas program again. Period.

When I informed my father I was no longer a little kid and therefore exempt from my annual chore, I was amazed when he agreed with me. He said it was clear I was no longer a child. I was becoming “a young man” and, as a result, I had a responsibility to serve the Lord in His Church. I knew he was scamming me a little bit, but there was a bit of truth in his argument. So I decided I would wait until the next year to end my Christmas program career.

Well, it didn’t work out that way at all. The longer I serve the Lord, the more I’m convinced that He has a rich sense of humor. Wouldn’t you know that I have been in at least one Christmas program every year without fail since then?

Last Sunday night, the Cash family helped the good Christian folks at First United Methodist in Newton with their annual “Drive-thru Living Nativity Scene.”  This is a big, well-done production (with live donkey, sheep, and even a llama) and people come to see it from miles around.

Susan was the angel-on-the-roof, and I was one of the three wise men. Spencer was a Roman soldier, and Madeline was the Virgin Mary. Seth was Joseph, and his girlfriend, Leann, was in the angelic choir. The photo below shows us all dressed up and ready to play our parts. 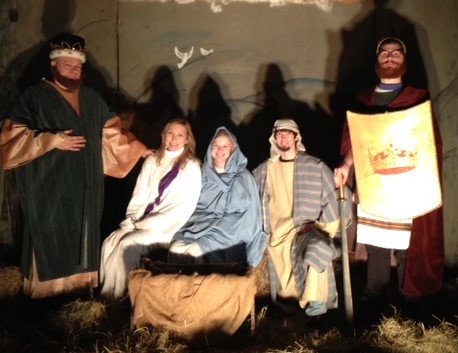 During the event, there was vegetable soup, hot chocolate, at least seven kinds of cake, and lots of good fellowship. As the church newsletters always say, “A good time was had by all.”

And when I was standing-as-motionless-as-possible for my three half-hour shifts, it was a great reminder of why we have Christmas programs every year.  From the open windows of the cars passing the scenes, over and over I heard moms and dads telling the story: “Now see that, those are the three wise men, and they followed the star so they could fall down and worship Baby Jesus….”

It made me remember that anything that makes people tell others the Story of Jesus is a good thing. That’s why you never get too old to be in a Christmas program.

Dr. John L. Cash is the “Country Preacher Dad.” He was raised in Stuttgart, Arkansas, and has spent the last 29 years being a country preacher in the piney woods five miles south of the little town of Hickory, Mississippi. (On week days has a desk-job at a public school, where he used to teach Latin on closed-circuit-television.) He and his lovely wife, Susan, live in the parsonage next door to the Antioch Christian Church (where the Preacher had a somewhat hard time getting the wise-man-beard-glue to come off his face.) Their kids include Spencer (age 23), his wife Madeline (age 23), and Seth (age 20).