16 ¶ So let no one judge you in food or in drink, or regarding a festival or a new moon or Sabbaths,

When my older son, Spencer, was a senior at the University of Mississippi, he had a professor who was always asking insightful questions about religion. On a recent pop-quiz, the instructor’s question was, “What’s the only major holiday that is completely Christian in its origin?” (I knew that Christmas and Easter were excluded because they both incorporated customs of some Roman holidays.) The correct answer (according to the teacher) is “Halloween.”

Well, I have to tell you, hearing that got me to thinking. When I was growing up, you celebrated Halloween by going trick-or-treating. And you also celebrated Halloween by going to church. Some of my fondest memories are of the fun we had at Halloween carnivals and parties given by the various churches in town. For Christians, Halloween was seen as a holiday that belonged to “us.” November 1st was “All Saints Day,” the day when the Catholic Church remembered all of the Christians who had died and were now with the Lord. The night before, October 31st, was the “Hallowed Evening,” which was shortened to “Halloween.”

I have always believed that the whole practice of trick-or-treating originated as a phenomenally funny historical joke in the name of the Church. Think about what it was like to live in the superstitious Middle Ages when there were no electric lights. You’re sitting alone in your pitch-dark house late at night on October 31st. You have plans to go to Mass the next morning in honor of thousands and thousands of dead people. (Not exactly a comforting thought.)

Just then, there’s a pounding on the door. You ask who’s there, and the answer comes, “I’m St. John the Baptist, back from the dead! They cut off my head and put it on a plate! I’m here a day early, and I’m as mad as can be. But give me something good to eat, and I’ll leave you alone!” As you look out the back door, you wonder why St. John the Baptist looks a little like your neighbor Bob the Blacksmith with a sheet over his head and a pumpkin under his arm. But, you give him a piece of gingerbread just to be on the safe side. 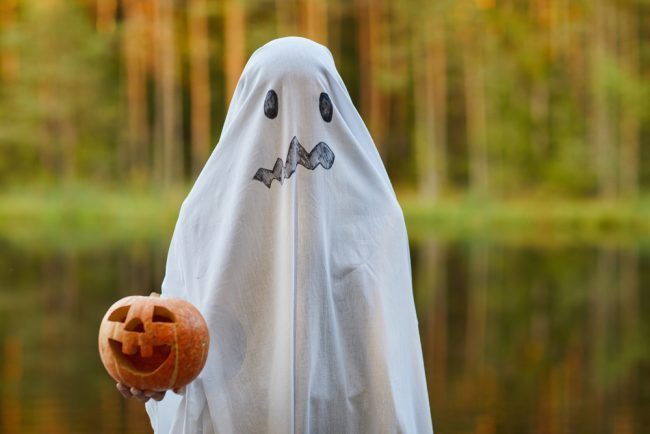 Voila! The first trick-or-treat is born. A practical joke that all Christendom enjoys for twelve-hundred years. Scare your neighbors, and get a sack of sweets, all in the name of the saints. Halloween, a holiday invented by Christians, for Christians.

But then, sometime in the 1980’s, Halloween got a bad rap. Suddenly, the word on the street was that Halloween is a Satanic high-holy-day when cult members practiced blood sacrifices and did other horrible things. The churches start having “Harvest Festivals” instead of “Halloween Carnivals.” Or the congregations stopped acknowledging the holiday altogether.

I guess I sort of bought into the rumors at the time. But now I’m not so sure. Before the advent of the Internet, there was a lot of misinformation that wasn’t easy to research. But since then, I’ve done a lot of reading. A lot of rumors I was taught as a child have been debunked — including the accusations made about Halloween.

Truth is, I didn’t know any Satanic worshipers who were celebrating Halloween when I was a child, and I haven’t ever met any since then. So, for me, Halloween is a holiday of the Church. You’ll find me handing out candy and being “scared” by little goblins when the last day of October rolls around.

In today’s Scripture lesson (at the top), St. Paul writes about the freedom Christians have to celebrate (or not celebrate) various special days. I celebrate many holidays, striving to highlight the aspects of each special day that are virtuous and loving. Some of my brothers and sisters in Christ choose not to celebrate certain days, and I love those folks and respect their convictions. Each believer should strive to live with a clean conscience and a heart of faith.

So, as the October 31st rolls around, have a Happy Halloween (if you see fit).

Or have a Happy Hallelujah Night.

Or have a Happy Harvest Festival.

Or have a Happy Reformation Day.

Dr. John L. Cash is the “Country Preacher Dad.” He was raised in Stuttgart, Arkansas, and spent

34 ½ years being a country preacher in the piney woods five miles south of the little town of Hickory, Mississippi. He’s currently on a sabbatical from the preaching ministry, and is an English teacher at the Choctaw Tribal School. He and his lovely wife, Susan, live in a brick house in town (where the neighborhood cats stop by for breakfast as they are enjoying the cooler mornings.) You can send him a note at countrypreacherdad@gmail.com.