I’m writing today’s column on a Tuesday that feels like Monday. We just finished a glorious Labor Day weekend with plenty of one of my favorite things – sleep.

I used to hide my secret love affair with sleeping late because I worried it would make me seem lazy. Our hurry-up society loves early birds but looks down on night owls. And there’s a reason why clichés like “I’ll sleep when I’m dead” have become commonplace. Americans often equate constant motion with not only effort but also success.

When I was in the chaos of early motherhood, I had a love-hate relationship with sleep. Not only did my kids not want to sleep, I resented my own bedtime and regularly shrugged it off. I’d stay up late just to have that rarest of commodities – uninterrupted time alone. The hours between the kids’ bedtime and 1 or 2 a.m. gave me time to hear myself think, relax with some non-cartoon TV, or read a book that didn’t have Elmo as the main character.

Even though I needed sleep, I felt angry at what felt like a “waste” of time – hours when I could’ve been getting things done. Writing. Emailing. Floor mopping. Laundry folding. I convinced myself that, were it not for the time wasted sleeping, I could become the kind of “supermom” who made things looks easy. 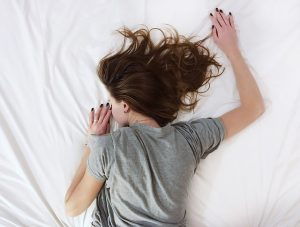 But during the pandemic, I woke up to the reality of what sleep can do. I’d been treating it like a necessary nuisance, but it has actually been an unappreciated friend all along.

A few months before Covid-19 showed up, our then 13-year-old daughter was diagnosed with epilepsy. One of the things her neurologist taught us is that lack of sleep would be the number one factor that could trigger her seizures. So, in addition to new medications, we also adopted a strict sleep schedule to keep seizures at bay. I often went to bed at the same time she did so she wouldn’t feel so alone in all the big changes happening because of her condition.

I also read more about brain health and its undeniable link to sleep. Until then, I didn’t understand what was happening in the human brain when it sleeps. But then I discovered articles by sleep scientists who put it in terms a busy mom can understand: When we’re asleep, the brain goes into clean-up mode. It’s almost as if an invisible cleaning crew sweeps through the brain to make sense of what happened that day and put things into their proper places. Store the memories. Take out the trash. Get things ready for the next day.

Without enough time to shut down, the brain’s clean-up crew can’t properly do its job. Things continue to get more cluttered and disorderly until it finally starts wreaking havoc on the whole body. If you “feel like a mess” after a few nights without enough sleep, it’s because your brain is literally a mess. It needs sleep time to clean things up.

In 2018, I read a hilarious novel by Allison Pearson called “How Hard Could It Be?” (which you should read immediately, especially if you’re a woman over 40.) The main character compares her middle-age brain to a vast warehouse of filing cabinets where an older man named Roy works as the retriever of information. She describes Roy as a kind but slow old man who shuffles through rows of files trying to locate information she needs.

The analogy fit so well that I adopted my own mental “Roy” and talk to him often. But the truth is, poor Roy can’t be expected to retrieve brain info if he’s constantly tripping over junk and tipped-over filing cabinets caused by lack of sleep. He needs things to be in the right places.

So, if I want Roy to help me remember where I put my phone down, or the name of the woman who’s waving at me in the grocery store, the guy needs a cleaner workspace. And that can only happen during sleep. Don’t expect him to “power through it.” He’s only human.

So, here’s hoping that you, like me, make friends with sleep. Enjoy it. Appreciate it. And never apologize for it. It’s part of the human design, and we’re all a mess without it.