My husband has a thing for green apples, which is why he planted an apple tree in our yard about two years ago. It was a tiny little tree when we bought it, but it finally grew up enough to start putting on fruit. Tom was pretty excited the first time he spotted the blooms and the beginning of what would become our first bucket of apples.

But over the course of the summer, the apple tree started looking suspicious. The small apples dangling off its slender branches didn’t look quite right. We decided it just needed more time, so we kept watching it, watering it, waiting for an apple to get big enough to pick. Finally last week, Tom came in from the yard holding a green piece of fruit he’d picked off the tree. He sat it down on the kitchen counter in front of me and announced the obvious: 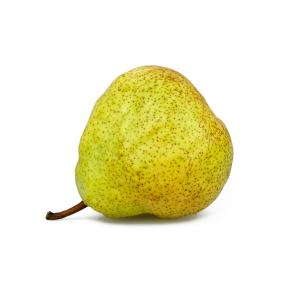 And there it was, one sad little speckled pear sitting in the spot where the bucket of green apples should have been.

“How did that happen?” I asked. “You did plant an apple tree, right?”

“Apparently, I planted a pear tree that had an apple tree tag hanging off of it,” he said.

Then we just stared at it, trying to replace our dreams of apple pie and apple cobbler with some other appealing dessert that includes pears. We’re still trying to think of one. (E-mail us a recipe if you have ideas.)

The apple/pear tree switcheroo got me thinking about just how often things turn out differently than planned. Sometimes the seeds that get planted in our lives grow into something entirely new and unexpected.

When I was about 10 years old, I remember having a conversation with my mother while we were riding in the car one day. We were talking about what I might be when I grew up, and I wasn’t at all sure what I wanted or what I’d be good at. My mother said it might be good if I became a nurse. I think she had dreams of me saving lives and marrying some wealthy doctor, and the two of us would give our entire extended family excellent, free medical care.

But then when I was 17, I passed out at the doctor’s office when a nurse pricked my finger for a blood test, and suddenly it was clear that a career in medicine wasn’t in the cards. Even though I didn’t end up doing what Mom suggested, she’s happy with the writing career that eventually took root and grew into this column. More importantly, I’m happy with it and that, in itself, feels like success.

I have no idea what our three kids will one day be. We have years of growing ahead of us and plenty of time to dream. What I do know is this: Sometimes you plant apples and get pears. Sometimes you think “nurse” and end up a writer. The one certainty in life is the element of surprise. The best we can do is hope for nice ones.