It’s hard to write with all the chomping in the room. Goldendoodles are not known for their table manners, or, in this case, floor manners. Mac is lying next to my desk loudly eating his latest conquest from the yard – a pear he plucked off the tree himself.

The tree has a long backstory, but the short version is this: Right after we moved into this house 15 years ago, we planted an apple tree that didn’t produce fruit for years. Then one year we finally saw the beginning of our long-awaited apples. But the oddly shaped green apples were hard as rocks. It took another month before we realized our apples were actually pears and that the tree had been mismarked at the store when we bought it.

But maybe it was fate because it turns out that Mac the Goldendoodle loves pears. He weighs more than 60 pounds now and has grown tall enough to come up to my waist. When I took him outside the other day, he trotted over to the pear tree, its lower branches so heavy with fruit that they bow low under the weight. Mac eyed one of the largest pears and reared up on his hind legs to grab hold of it with his jaws.

Then I heard a “snap,” and Mac trotted off with green leaves sticking out of his mouth. He found a shady spot of grass and plopped down so he could sniff 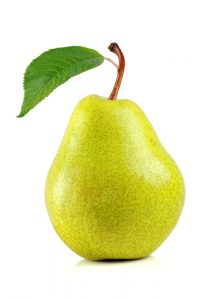 his pick. I was stunned. It was the first time I’d seen a dog pick produce off a tree. He nibbled at the pear and then rolled over on his back with the fruit in his mouth, stretching long furry legs toward the sky.

When he finally dropped it, I picked it up and threw it across the yard so he could chase it down, ears flying in the wind. It turns out that pears are a multi-faceted fruit. They double as juicy tennis balls for an impromptu game of fetch, and the fetcher can eat it when he’s done playing.

We came in from a trip outside a few minutes ago, and Mac brought his latest pear-ball inside with him. His chewing sounds louder today in the stillness of the house, which has been pared down to only four. Yesterday we moved our oldest son back to his college campus for his sophomore year of school. We spent the day in the August heat schlepping books and bedding into a second-floor dorm room roughly the size of a walk-in closet.

I thought I’d be ready for the move because we did this last year when he was a freshman. I thought the hard part was over. But when it was time to leave him standing in front of his dorm, I felt the all-too-familiar lump of emotion swell and lodge in my throat.

Me: (Blinking back tears behind my sunglasses.) “Okay, I’ll save the crying for the ride home, but I’m still gonna do it.”

Him: “Fair enough. I’ll come home next month for a visit.”

Then I hugged him twice, ordered him to go have fun, and let Tom handle the three-hour drive so I could mope in the passenger seat. I didn’t realize the summer months gave me just enough time to grow accustomed to the sound of his footsteps in the house. Just enough time to expect to see him on the sofa when I walk in the room. Just enough time to get attached to saying “table for five” again.

Now here I am. Alone in a mostly quiet house with a pear-eating dog at my feet. Our oldest kid is in another zip code. The other two are across town in high school. And I’m painfully aware that one day, before I’m ready, all of them will move away for new adventures and leave me with a pear-sized hole in my chest where my heart used to be. Tom and I will be on our own, and you know what that will make us?