I read a magazine article today about a new type of portable pool you can install in the back of a truck. It’s called a Pick-Up Pool, and it looks like a sleeker version of a waterproof mattress cover sized to fit perfectly in the back of a pick-up truck. I can’t wait to show the article to my dad, who was apparently way ahead of his time when, in the late 1970s, he turned his new dump truck into a swimming pool in our backyard. 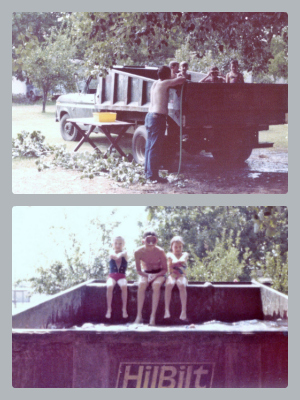 Judging by family photos, I must have been about 6 years old, and my brother was 12. The forest green dump truck was new – Dad’s big investment in his one-man landscaping business. But before it hauled dirt, gravel and tree limbs, it held a ton of water and a dozen neighborhood kids.

I was still small enough that, in the deepest part of the dump truck pool, the water was over my head. We stood on the metal platform over the cab of the truck and jumped into the water, convinced it was the coolest pool in the world.

When the swimming session was over, we all clapped as Dad raised the dump truck’s bed to an incline and all the water came gushing out into the yard below. Not only was it a pool, it was a man-made waterfall, too. Does it get any better?

The timing for that dump truck pool was perfect because I was young enough to appreciate the simple genius of it. Six years later, when Dad drove me to middle school in that same dump truck, I was mortified and begged him to let me out before we got to school so no one would see me climbing out of that green monstrosity. Instead he dropped me off in full view of my classmates and then honked and waved as he drove away. (I assume it was payback for being a snarky teenager. Well played, Dad.)

That’s one of the best parts about having little kids – how easily impressed and delighted they are with simple things. When our own three kids were little, they, too, loved all things water-related but we didn’t have a pool or live in a neighborhood with one.

So one day, when Tom was washing the car in the driveway, he emptied three Rubbermaid storage bins he found in the garage and filled them with water and soap suds. Then he let each kid climb into their own personal “pool.”

Oh, the looks on those little faces. You would have thought we’d given them an Olympic-size pool full of Skittles. They were beyond thrilled with their driveway pools, so storage tub swimming became a summertime ritual at our house until they were too big to fit inside.

Now that the kids are 15, 12 and 10, it’s not nearly as easy to impress and delight them. Sometimes I’m convinced that, even if I came home and announced that Beyoncé had invited me to go on tour with her as a back-up dancer, our kids would probably give me a lukewarm “Meh” and then go back to downloading apps.

So to all you parents of littles who are weary from wiping bottoms and cutting grapes in half and surviving the occasional but fierce toddler meltdown, try to enjoy these years when your kids still regard you with awe and wonder. It doesn’t last forever.

Though there are plenty of good things to look forward to as kids get older, sometimes I’m sure my own dad misses the 6-year-old girl splashing down in his dump truck, just as I miss those storage tub swim moments on the driveway. 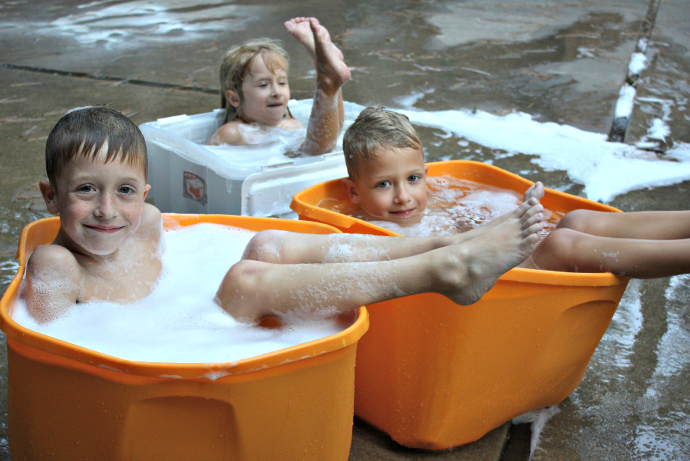