Every time I’ve begun potty training one of my boys, I’ve stood at my front door staring at a newly arrived box of diapers and thought, “Ahhhh. This is it. This could be the last one.” 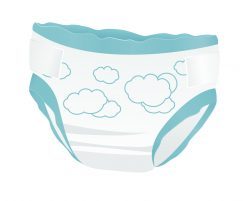 Logically I know potty training takes time, practice and lots of it. So this is a fantasy of the early stages. It’s what I tell myself is awaiting—a life without diapers.

With my first son, I loosely began potty training on his second birthday with the hopes that he would be fully trained by his third birthday, and he got serious about it by age 2.5.

Looking back, the best thing we did for Henry was to put him in charge of his own timeline. I think it took some of the pressure off of us along the way.

And although I’ve heard more than a few times to never compare baby #1 and baby #2 (since they will likely be night and day), it still surprises me just how different they can get.

It was nothing alike from the get-go.

Elliott showed potty readiness waaaaay earlier. At 18 and 19 months, he would casually hop on the training potty (fully clothed or with just a diaper on) a few times a day seemingly without any of the fear Henry had.

Seeing your inseparable big brother march off to the potty every other hour must be motivating, but I added incentives. I ditched the changing pad and started changing Elliott’s diapers exclusively in the bathroom during these visits to encourage that enthusiasm and make connections of what we do there.

We also moved Henry to the big potty to leave the training potty to his little brother.

All about the books

One small similarity was that Elliott enjoyed a potty book phase too, just not always the same books. If nothing else, his earliest visits may seem like a special story time. Elliott knew that every couple of hours, he could go to this little room where he had a special seat of his own and if he sat, mama would read his choice of potty book.

If he happened to pee before/during/after, even better! But really, it was all about the stories.

He liked Henry’s old favorites from Sesame Street well enough: P Is for Potty, Potty Time Songs and Elmo’s Potty Book (First Look and Find). Pressing the buttons of the songbook and lifting the flaps was gratifying stuff.

But he quickly asserted his own personality by preferring, almost religiously, books that didn’t mean quite so much to his older brother.

He would much rather have fun finding objects in Where is Elmo’s Blanket? about 5 bajillion times a day and Daniel (Tiger) Goes to the Potty almost as much. So I capitalized on that love and snapped up Potty Time! by Daniel Tiger’s Neighborhood, which he quickly came to adore for its easy-to-carry handle and musical buttons. 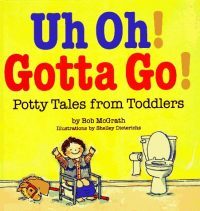 Once he got his hands on Uh Oh! Gotta Go! by Bob McGrath, all the other books were white noise. Elliott loved hearing about how/where/when other toddlers were going potty. My husband likes to call it Instagram for babies.

Once we read all those potty books enough for them to be memorized or internalized, Elliott began to lose interest in them and some days it feels like he’s not too interested in the potty in general.

I tried to motivate him with a sticker chart, which worked for one of Henry’s phases. Henry loved everything about the sticker chart process, but so far it hasn’t inspired Elliott. It has entertained him only a time or two.

I’m not sure if it’s his age (being months younger than Henry was then), or his personality (who enjoys keeping the stickers in their original books and places, only for looking at), but it feels unconnected to his experience of going potty.

So instead we’ve had to find what is logical to him.

Finding inspiration for the “go”

Elliott’s motivations are different. His incentives are getting to play in various ways in the bathroom. Moving the stool so he can turn the lights and fan off and on at his will; dumping the training seat into the big potty himself: these are the things he lives for.

So who am I to judge? If that gets him comfortable and returns him to the bathroom, or keeps him there a little longer—long enough to think about using the potty and maybe even doing it, then that’s fine by me!

During one whole week, Elliott asked for bubbles while trying to go. It made such a fun atmosphere, and I was happy to oblige seeing both boys’ moods lift. We can blow bubbles while he tries, I have the time.

But with this little one, as I’m learning, his phases are fleeting and ever changing.

I’ve kept my positive-only approach this time, too. If Elliott comes to the potty after he’s already pooped in his diaper, I am just elated that he came to the bathroom at all. To me, that’s a clear sign that he knows where poop goes, even if he got there a little late.

The first time that Elliott peed standing up, the stream didn’t even get close to the potty and went sailing between Henry and I. That kind of thing might have infuriated me during my first potty training experience, but this time all I could do was laugh. My little guy was figuring this out. He was peeing in the bathroom, and how great was that?

Remembering what mama needs, too

This time around, I’m more aware of what I need to stay sane through the potty training process. I bought a steam mop, which has felt like a bit of a present to myself having a quick way to clean up messes in between more thorough cleanings, and honestly that’s made a difference in my mood and ability to be patient.

I experimented with putting Elliott in big boy underpants to see if a few accidents would encourage him to get to the potty faster, but so far it hasn’t made a difference. Rather than revel in constant messes, like I might have gritted my teeth and endured the first time, I am happy to keep him in diapers in between our “let’s try” visits.

Because the happier and calmer I am, the steadier progress he can make.

We’ve been at it for 2.5 months now, and Elliott’s track record is all over the place. Some days he’ll have several successful visits, sometimes even pooping on the potty, while other days he doesn’t want anything to do with it and won’t even pee there, and that’s OK.

We’re still figuring this out, him and I. All I know is that he doesn’t need to fit into the confines of his brother’s experience. Whatever makes sense for this little guy, that’s what we’ll do.