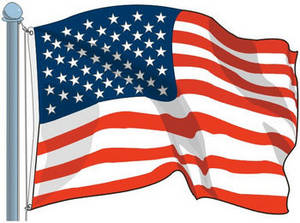 Happy Memorial Day!! I hope everyone had an awesome relaxing day spent with the ones they love. I also hope that everyone took just a few moments to remember the very reason we have this holiday and just how important it is.

Like many of you, I grew up saying the pledge of allegiance daily, and singing the “Star Spangled Banner” before ballgames. Today, our kids will grow up in school never knowing that the pledge is something more than a bit of literature that is recited once a week as part of the “Monday routine”. Yes, there are a few schools, mostly elementary, that continue the tradition.

However, in high schools the pledge has become something that we do “if we want to”.  As a high school teacher, I am asked to respect the rights of those who do not wish to participate in the pledge and while I have no problem respecting those who refrain for religious purposes, or even cultural reasons, the basic, “I don’t care” or “what’s the point” reason simply infuriates me!!

It’s all I can do to continue my duty as an instructor, respecting the beliefs of those around me when those same individuals don’t respect the very foundation of the country I was raised to love and defend. Yes, I suppose I’m a bit touchy, knowing how much my family has sacrificed for generation after generation over the last century or more. Regardless, I do so without a word. Instead I have vowed to teach my child everything I know about the wonderful things our country has to offer others, and that when he sees an American flag, we are to place our hand over our heart to honor those who have fought so bravely for it.

Since Jess was 2 he has been saluting our flag and saying “Mommy, we do wike dis when we see da fwag, wight?” Bless him! At that age he already respected the red white and blue more than many 16-year-olds today. And now that he is 5, one can actually see how respectfully he looks at our nation’s symbol and how he really does set it above the rest.

Nonetheless, I find the general lack of patriotism exhibited by our nation’s youth somewhat disturbing. I have often wondered what has happened that they would come to hate this country so much and then it dawned on me. Kids, while they should be held responsible for their own actions, are still a product of their environment. If their parents don’t instill a sense of “love of country” in them then, it’s likely they won’t be able to learn it anywhere else.

Our school systems are so overwrought with the politically correct notion to not offend others that they don’t have much of a leg to stand on when it comes to teaching patriotic principles. We’ve simply lost too much of the “American” in trying to accommodate other nationalities. Again, I absolutely respect the rights of the culturally diverse population but I find myself wondering, what happened to the rights of the “American”? So, the last line of defense in educating our youth about what it really means to be an American is our nation’s parents.

Do you remember how it felt as a kid when someone didn’t say the pledge with the rest of the class, or didn’t stop and pay attention to the flag during the Star Spangled Banner? It’s the same feeling you get when you watch a funeral procession drive by and see another car fly unyielding through an intersection because they either didn’t notice or didn’t care. Either way, the procession went completely unnoticed, much like our patriotic spirit goes unnoticed in general…except on major holidays where we might buy napkins, plates, and cups in red, white and blue but otherwise pay little mind to why we do it other than it’s fashionably correct.

I don’t know about you but I was nearly mortified and embarrassed for that person. Is it possible that I’m the only one that noticed? Surely not. I refuse to believe that I could possibly be the last patriot on earth. Of course I’m not, but in today’s society, I am beginning to feel like that may, in fact, be true. Last Veteran’s day, my dad was invited to attend an a elementary school concert at a local nursing home, along with all other veterans in the area.

As our nation’s colors were presented, an announcement was made to please stand if you like and sing our National Anthem. Of course, Dad stood and looked around the room to see the a sprinkling of patrons in the crowd haphazardly stand as though they were being forced to drink prune juice, and then he noticed the front row which was filled with WWII veterans, all of which were wheelchair bound.

As the music began to play, he noticed a bustling of nursing home attendants running to the aid of several men in the front row. To his amazement, every one of them was struggling with all his might to stand and salute the flag and the nation that they so gallantly fought for, only to see many members of the crowd still sitting. It just goes to show that our nation has lost its meaning. So many of us didn’t have to earn anything in our lives to be members of this country because of men and women like them, and many of us won’t even make the effort of take the time to acknowledge that very fact.

If you happen to share my thoughts and concerns in anyway, I challenge you to make a change for yourself and your family. Talk to your children about why paying homage to this great nation and the flag is important and that it is a symbol of our freedom and a representation of all things good in this country.

Yes, there are horrible things in our world that need to be dealt with like politics, and the economy. However, our nation was founded on the belief that it’s people should be able to live freely in religion and politics and not have to agree or be on the same side of opinion but rather agree to disagree and still be respected for such ideals.

The United States of America is a pile of multicolored clay on a potter’s wheel, waiting to be molded, yielding only to the water and force applied by the potter.  While it can become something amazing or be destroyed, like clay, it can be rebuilt to reveal its original beauty once more. We have that opportunity right now to begin rebuilding our own patriotic identity but it’s up to us to teach our children what it means to be an American, to understand and respect others for their own individuality, and to learn from our differences.

However, if we fail in this regard to build a better American, our futures will be filled with a truly country-less population, yearning to find hope, independence and unity in another country, much like our forefathers before us…however, the problem for us will be that there is no other place to go.