My husband’s niece, Kelly, and her husband just announced this week they’re expecting a baby. The family’s all a-twitter and Kelly and I have been e-mailing back and forth (she’s a lawyer in Philadelphia).

As we ping-pong messaged, I shared a few things with her about my pregnancy days:

The list could go on and on, of course. 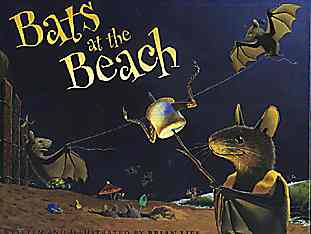 Instead, I want to tell you about being the “Mystery Reader” in my daughter’s second-grade classroom. I brought Bats at the Beach, one of Ladybug’s favorites (the kid loves bats, what can I say?). We had a little time left after that, so I also read Bats at the Library. Then my sweet daughter volunteered me to sing. I declined, but decided to go on ahead after those little faces looked up at me expectantly.

I quickly chose My Favorite Things from The Sound of Music and by the end we were all singing together, “And then I don’t feel soooooo baddddddddd.”

I felt like Julie Andrews. Except I think that’s probably when one of the kids slipped me some strep throat.

After my reading time was over, Ladybug begged me to stay until school was over. Her teacher helpfully said that was fine, so we held hands to the fourth-grade class where the older kids would do “math games” with the younger ones.

We moved to two different classes. When we got to the second one, I decided to pick up a classic from the fourth-grade bookshelf: “Are You There God? It’s me, Margaret“. Wow. I hadn’t read that one since … well, maybe since fifth grade.

I must have read for longer than I realized, because when I looked up, there were no second-graders in sight. I asked the fourth-grade teacher, who was now lecturing at the front of the room, if the second-graders had gone back to class. “Yes,” told me, then: “Are you a second-grade mom?” I said yes and she added, “I was wondering who you were with.”

Red-faced, I slunk out, got lost in the hallway (I could seriously use a GPS for Christmas), then finally made my way back to Ladybug’s room.

I told her teacher that I had been reading and hadn’t realized the kids had left.

“Sounds familiar,” she said with a big grin, and I was reminded that in a recent parent-teacher conference she said Ladybug will sometimes daydream to the extent that the rest of the class will be lined up at the door and she’ll still be sitting at her desk.

Apparently my apple doesn’t fall far from her mama tree.