Willa Lyon’s story began with just another run-of-the-mill ear infection. Her daughter Brittany, 15-months-old at the time, was home on a Friday with a sitter while she was at the hospital, working as a cardiac nurse. The sitter called to say that it looked like Brittany might have another ear infection on the way. She was tugging at her ear, had a low-grade fever and was a little cranky. Willa called the doctor, and her daughter received oral antibiotics to begin that day.

When Willa arrived home, Brittany’s fever was beginning to go up, as fevers typically do at night. In the middle of the night, her fever spiked to 105 degrees. Willa called the doctor’s office and they told her to give her a lukewarm sponge bath to bring down the fever. It worked. The fever returned to 101 degrees and stayed there the rest of the night and into the next day.

Though the fever was now under control, Willa noticed that Brittany’s behavior was off. She was typically a high-energy toddler, even while battling an ear infection. On that day, however, she was very drowsy and became more and more drowsy and lethargic as the day wore on.

“At one point, I remember walking into the living room and seeing Britt sitting still on the sofa. Then she kind of toppled over, as if she was falling asleep,” Willa said. “I went over to her and when I moved her arm, it felt limp. I knew in that second that it had to be more than an ear infection. Something was really wrong. I called Dr. Goss and he said ‘Get her to the ER. I’ll meet you there.’ And I told him we were on the way.”

When Willa placed her daughter in the car seat to go to the emergency room, she was very sleepy but still moving. In the moments just before they arrived at the hospital, she was unconscious and totally unresponsive. Whatever was wrong with Brittany was moving at lightning speed. She had no reaction to needle sticks, blood draws or even IV placements.

Little Brittany was so lethargic that emergency room doctors first suspected she might have accidentally ingested pills that drugged her into a deep sleep. But Willa knew it wasn’t an overdose and insisted the doctors keep looking for another explanation. Brittany’s pediatrician, Dr. Steve Goss, called the ER while in route and told them to admit her to the ICU and prepare for a spinal tap.

When Dr. Goss arrived, Brittany was prepped for a spinal tap – a procedure which didn’t even make her flinch. He knew he was dealing with a seriously ill baby. When he saw the cloudy fluid extracted from her spinal cord, he knew what they were facing: bacterial meningitis.

Dr. Goss began treating Brittany’s meningitis with powerful IV antibiotics right away. But her coma persisted. “No one could tell us if and when she would wake up,” Willa said. “Everyone was being very cautious. They said it was a waiting game.” While she waited, Willa and her family reached out to every prayer chain they could find, hoping that modern medicine and God’s grace would work together. Based on her own training as a nurse and information from Brittany’s doctor, Willa knew that meningitis often causes a child to have long-term limitations with motor skills, hearing loss, motor deficits and learning disabilities. So they prayed, and they waited.

Four days after contracting bacterial meningitis and slipping into a coma, 15-month-old Brittany Lyon began to wake up. The doctors, nurses, antibiotics and hundreds of prayers had worked. Brittany was going to make it. (Two other people in Northwest Arkansas who contracted a similar strain of meningitis around the same time as Brittany, were not as fortunate and died of the disease. All cases of meningitis are reported to the Health Department.)

On Day 7, Brittany was strong enough to sit up in her bed. That’s when this photo was snapped of her with Mom Willa. On Day 10, Brittany went home with her parents and big brother, Dustin. 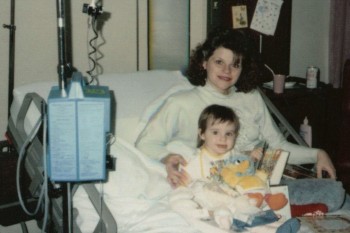 One of the lucky ones, Brittany went on to make a full recovery. Today she is a freshman attending the University of Arkansas, majoring in psychology. She is on the U of A pom-pom squad and performs at football games, other athletic events and dance competitions. Watching her out on the field, you’d never guess that she once faced a childhood disease that is often deadly. (Photo courtesy of RazorbackSpiritSquads.com)

Every detail of those terrifying 10 days is etched into Willa’s mind. “I will never forget that feeling of helplessness,” she said. “Honestly, meningitis hadn’t even crossed my mind. All the symptoms were consistent with another ear infection. The only thing that was different was that big shift in her behavior and the severe drowsiness. Knowing my child and knowing that there had been this big shift in her behavior was what helped me realize that this was really serious. I was operating on my instincts as a mother more than anything else.” Willa said that she hopes all moms will honor those maternal instincts and not worry that a doctor might think you’re overreacting. “Don’t ever worry about feeling embarrassed in front of the doctors or other family members. You’ve got instincts, and at the end of the day, your child’s health is all that matters.”

Viral meningitis is more common and less severe than bacterial meningitis. But it’s important to know the symptoms. Dr. Goss said the symptoms can manifest suddenly but can also start smaller and smolder over a few days. Click the icon on the right to see a video podcast of Dr. Steve Goss explaining what symptoms are most often associated with cases of childhood meningitis.

At the time of Brittany’s illness, there was no standard vaccination for meningitis. Since then, the Hib vaccine (normally given at 2, 4, 6 and 12 months of age) was introduced and has drastically reduced the number of cases of meningitis in young children. In fact, Dr. Goss has not seen the same type of meningitis case since he treated Brittany 17 years ago. The disease has become rare.

But it’s important to know about the proper vaccines for kids, adolescents and young adults. Click on the icon on the right to see a video podcast of Dr. Goss talking about meningitis vaccines.

This story had a good outcome partly because of a good relationship between the mother, the patient and the doctor. Willa had taken Brittany to the same doctor since birth. Dr. Goss knew Brittany’s medical history, and he quickly realized that what started as an ear infection had likely become blood-borne, settled into her spinal column and turned into something far more serious.

“There is often a difficult balance for moms, between not overreacting and not underplaying what is going on with your child. One of the important things to do is to have a doctor you’re comfortable with, who really knows you and your child… Every child needs a ‘medical home’ where she has a doctor who knows her history. Walk-in clinics do fill a need, but they aren’t a medical home for your child,” Dr. Goss said. “Because meningitis is a medical emergency, doctors are trained to do a spinal tap if there is even a hint of the disease. So if your child ever needs a spinal tap, don’t be overly worried about allowing the procedure to be done. It’s a safe procedure, and it can tell us so much about what’s going on with your child’s health.”

We love a story with a happy ending, and this one certainly delivers. Pictured below (from left) are Willa Lyon, daughter Brittany Lyon and Dr. Steve Goss of Mercy Health System. 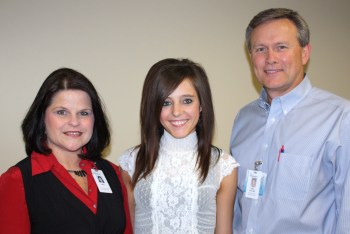