Editors’ note: Congrats to Haas Hall Academy, one of our website sponsors who recently earned a Mom-Approved Award in the “Best Charter School” category. Get info on everything Haas Hall offers in today’s featured profile. 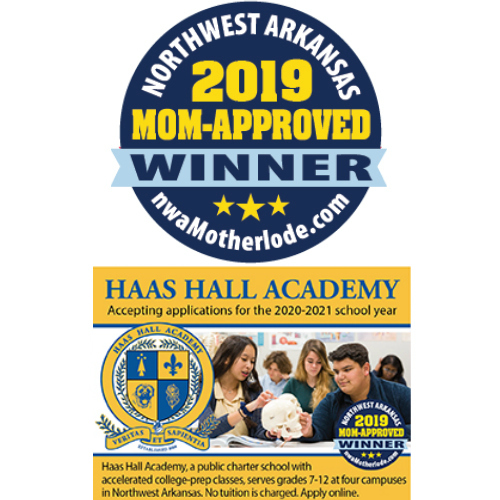 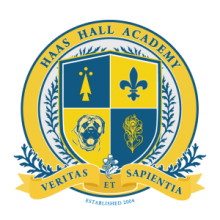 Haas Hall is a public charter school and does NOT charge tuition. Admission to the school is determined by a random drawing (lottery system).

What you might not know about Haas Hall Academy:

What local parents are saying:

“Haas Hall Academy in Bentonville has been a game-changer for our three kids. My oldest son began school there in 8th grade and is now a senior. In his previous middle school, he was quickly losing interest in classes that weren’t challenging, and the school culture was rough. At Haas, he immediately felt like he belonged there, and the teachers are the best we’ve ever met. We are incredibly fortunate to have a nationally ranked school like this one in Northwest Arkansas. When our oldest son leaves for college next fall, I know he’ll be academically ready for the new challenge because Haas has prepared him so well.”  ~ Gwen Rockwood, mom of three scholars at Haas Hall Academy Bentonville

“My husband and I had no idea what to expect when we entered our children in the Haas Hall Academy lottery and they were selected. We soon discovered that the school ethos is not just a push to achieve academic excellence, there is a framework in place to support scholars in reaching their goals. The class sizes, and campus numbers, are smaller than the average public school so teachers can get to know their classes and provide meaningful feedback. Teachers are dedicated, approachable, and want the scholars to succeed! The school uniforms minimize stress, promote cohesion, and allow scholars to focus on learning. Despite the smaller size, there are opportunities to engage in extracurricular activities like community service clubs, sports, and academic competitions. Two of our children have already graduated from Haas Hall Academy and were prepared for the rigors of college. Choosing Haas Hall Academy for our children worked for our family and may be our most important parenting decision of their school careers.” ~  Tiffany DeSpain, mom of two graduates and one current scholar at Haas Hall Academy Fayetteville

“Haas Hall Rogers has played such a positive role in what my daughter is today. I have seen her develop from an insecure girl to the go-getter she is today. This amazing historic campus made her thrive and flourish to her maximum potential. She loves how qualified, challenging, supporting, and understanding the faculty is! The headmaster has also contributed a lot in making her such an empowered young lady. Aardra also enjoys participating in the various award-winning clubs offered at her school. This is one of the most diverse campuses we have seen and she feels welcomed and secure there. I owe Aardra’s ‘Go get it’ attitude completely to Haas Hall Rogers. This campus makes kids find solutions and not problems!” ~ Reshmy Menon, mom of current scholar at Haas Hall Academy at The Lane (Rogers)

“Wesley is in his second year at Haas Hall. It was clear from early on that his teachers have taken a personal interest in him and are invested in his success. He is encouraged to challenge himself and supported by his teachers when he needs additional help.Small class size yields small school feel; it is easy for our son to socialize, knowing all of the scholars in his cohort class. Wesley is thriving, enjoying school for the first time.” ~  Sharon Williams, mother of current scholar at Haas Hall Academy at The Jones Center (Springdale)

Congratulations to the faculty and staff of Haas Hall Academy.