“Then I will teach transgressors Your ways, And sinners shall be converted to You. “

I love Church history.I guess at first glance it sounds boring, but in reality, it is full of all sorts of little stories that are both fascinating and instructive for Christian living. One of my favorite tidbits of history is the tale of a man named Telemachus.

The story of his life teaches us to never underestimate the power of one individual—especially if he is not afraid to publicly declare his convictions with quietness and authority.

Most of us are familiar with the historical accounts of the gladiators. These were the swordsmen who fought to the death in the Roman arena, all for the entertainment of the common people who came to spectate.I think we tend to gloss over the sickening nature of this barbaric entertainment. 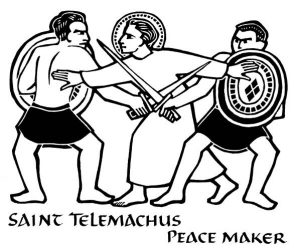 The people of that time in history had become so calloused that the regular pastimes of life had become boring to them. Did you know that the Latin word “arena” means “sand”?The floor of the coliseum had a thick layer sand, because this made it easier to cover the blood that flowed from the dying men and animals. It is pretty sickening when you think about it.

But sometime in the 5th century, there was a monk named Telemachus. He lived in a monastery, where he spent his days in prayer, far from the cares and the concerns of the outside world. For some reason unbeknownst to him, Telemachus felt compelled to leave the safety of the cloister and to travel to Roman. As he entered the city, he fell in step with a throng of people who were hurrying to see the gladiatorial games in the arena. His life of solitude and prayer had not prepared him for the viciousness he was about to behold.

As Brother Telemachus witnessed the swordsmen engaged in a struggle to the death, he stood up and made a quiet proclamation:

As he continued to repeat his sentiment, more and more of the crowd became quiet as they considered what the old man was saying.In anger, one of the gladiators rushed on the old man and ran him through with a sword, as Telemachus cried out his dying words:

Tradition tells us that the stunned crowd turned and left the coliseum in silence. Not long after that, the Christian Emperor Honorius (who had been impressed by the faith of Telemachus) declared an edict that banned the gladiatorial games forever.

Make the world a little bit better place this week. Believe in what is good, and stand up for what is right.Speak your truth with authority and quietness.And do it for the sake of Christ.

Dr. John L. Cash is the “Country Preacher Dad.” He was raised in Stuttgart, Arkansas, and has spent the last 28 years being a country preacher in the piney woods five miles south of the little town of Hickory, Mississippi. (On week days has a desk-job at a public school, and until recently taught Latin on closed-circuit-television.) He and his lovely wife, Susan, live in the parsonage next door to the Antioch Christian Church (where the first day of Spring was a perfect Spring day.) Their kids include Spencer (age 22), his wife Madeline (age 22), and Seth (age 19).