I’ve had a really good week this week, and I’ve completed a great deal of work.  That always gives me a feeling of accomplishment.  So, I thought I’d share with you a “household hint” that has really been helpful.

Some years ago I read an anecdote in an old Guideposts magazine about a man who was always happy when he was working at the office. His secretary asked 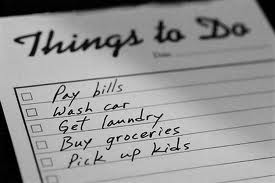 him the secret of his joy. He explained that he had a strategy for tackling the enormous pile of tasks that he was required to complete each day. First of all, he made a list of all the things that he needed to do.

I’ve been using that strategy this week, and it is extraordinarily helpful. I find it is useful to use this kind of thinking even in the middle of a task;  for instance, when I am folding a load of laundry, I look to find the easiest garment to fold. (“Hmmm, that handkerchief won’t take any effort to do, and then I’ll fold that hand towel….”)  It may sound a little silly, but you can’t argue with the results.

In so many facets of life, improving our way of thinking about a situation is the equivalent of improving the situation itself. King Solomon said it this way, “As a man thinks in his heart, so is he.” (Proverbs 23:7). So, approach your work with hope and joy. Because nobody ever got a sunburn from “looking on the bright side.”

Dr. John L. Cash is the “Country Preacher Dad.” He was raised in Stuttgart, Arkansas, and has spent the last 29 years being a country preacher in the piney woods five miles south of the little town of Hickory, Mississippi. (On week days has a desk-job at a public school, where he used to teach Latin on closed-circuit-television.)  He and his lovely wife, Susan, live in the parsonage next door to the Antioch Christian Church (where the Preacher is ready for Autumn weather even though it still feels like summertime in Mississippi.)  Their kids include Spencer (age 23), his wife Madeline (age 23), and Seth (age 20).