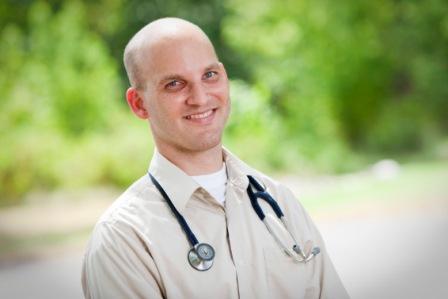 If, God forbid, your child gets sick and his or her doctor is having a tough time coming up with the reasons why, you’ll definitely want to know exactly what a “doctor’s doctor” or a “Meds/Peds Physician” is. We learned a lot from the following interview with Dr. Joel Fankhauser, and now we won’t be secretly confused about what an “internist” is and what that really means. (Think of television’s Dr. Gregory House, minus the bad attitude. 🙂 )

Dr. Fankhauser is one of the area’s newest specialists, and he is working at the Garrett-Goss Clinic in Bentonville, which is part of the Mercy Health System. In addition to his training as a Meds/Peds physician, he is also a primary care doctor and can see children as well as adults for regular visits.

If you or your child should ever need someone who specializes in making a difficult or complicated diagnosis, we hope this interview will help you remember the vital role that a “doctor’s doctor” plays in health care.

How is a doctor of internal medicine different than a general practitioner or pediatrician?

A doctor of internal medicine, or internist, is a physician who has specifically trained in adult primary and inpatient care. In contrast to pediatricians, they are trained to address adult health issues. In contrast to general practitioners, they have primary care training as well as typically more inpatient training than a family medicine doctor. An internist typically will do well-woman visits but does not deliver children, as some family medicine doctors (especially in more rural areas) still do.

Internal medicine residency training is three years spent entirely in outpatient (primary care) and inpatient (hospital care) adult medicine. A Med/Peds physician is a physician who has completed a combined pediatrics and internal medicine residency. Residency is the period after medical school during which an individual is a physician under the guidance of fully-trained physicians, like an apprenticeship, of sorts.

What are the specific types of diseases/conditions that an internist would diagnose and treat in adults and/or children?

An internist typically feels more comfortable than a pediatrician in addressing what used to be traditionally adult health issues such as type 2 diabetes, hypertension, or high cholesterol. A Med/Peds physician has been trained to address the health and well-being of any patient from birth to old age. For more information on who an internist is, and what he or she can treat, I would recommend checking out the following website: http://www.acponline.org/patients_families/

When there are multiple problems in a child’s health, what are the first steps in diagnosing what’s going on?

Most physicians want to find a common cause for multiple simultaneous problems. The hardest part, but also one of the most crucial parts, of being a good physician is creating a list of potential diagnoses, called a differential diagnosis, for a particular illness or symptom. This can usually be made after a history and physical examination. Once a physician has made that differential, he or she must then decide which particular diagnosis or diagnoses are most likely and how to best make that diagnosis more certain.

We know that sometimes an internist is referred to as a “doctor’s doctor.” What does this term really mean?

An internist is often the physician consulted to help solve a particularly difficult diagnostic dilemma. The majority of nonsurgical specialists such as cardiologists, gastroenterologists (stomach doctors), nephrologists (kidney doctors) are initially trained as internists and then do further specialized training called a fellowship after residency.

What’s the difference between a pediatrician and an internist?

A pediatrician is a physician specialized in treating children. An internist specializes in treating adults. A Med/Peds physician has completed specialty training in both pediatrics and adult medicine.

Can you give us some examples of cases you’ve had where you helped solve the puzzle of what was wrong with the patient/child?

It’s hard for me to be too specific due to patient privacy laws. I think some of the most difficult diagnoses to make are those involving deficiencies or excess of hormones such as growth hormone or cortisol because these illnesses are relatively uncommon and often times the patient’s symptoms are very nonspecific.

I do recall one specific case in which the diagnosis itself was not difficult to make but was an emotionally difficult diagnosis for the family and required that the child stay in the hospital for a prolonged period. For me, forming that bond with the family is why being a doctor is worthwhile.

What led you to Northwest Arkansas and how long have you been in the area?

I completed my residency training at UAMS and Arkansas Children’s Hospital. After residency, my wife and I looked at jobs in Little Rock, Northwest Arkansas, and Dallas, where we’d lived prior to residency. We came here for a variety of reasons. First, my wife has family here. Her grandparents have lived here for most of their lives. She’s the eldest of seven girls and two of her siblings go to school in the area. We really enjoyed the more spacious, laid back lifestyle of Northwest Arkansas compared with the other two towns. We also really enjoyed the doctors with whom I work at the Garrett-Goss Clinic. We’ve been in the area for about 2 months.

Tell us about your family and what you like to do when you’re not working.

I’ve been married for eight years. I have three children, ages 5, 3, and nearly 2. We also have two dogs, Lewis and Minty Maizy Ruff Ruff (named by our kids). When I’m not at work, I’m usually with my family. My wife and I really enjoy the outdoors. We love to go hiking and camping. We want our children to grow up to appreciate the outdoors. Since moving up here, my wife and I have built our boys bunk beds. We’re currently making a chicken coop to raise a few chickens.

Dr. Joel Fankhauser is a Med/Peds Physician at the Garrett-Goss Clinic located at 2900 Moberly Lane in Bentonville. You can reach the clinic by calling 479-273-1550.