Today I flashed back about 35 years ago to a time when I went to play at a friend’s house for the afternoon. This friend had a hamster named Harry, who seemed harmless enough, except that he looked too much like a mouse on steroids.

When I asked my friend what she did with the hamster besides hold it occasionally, she showed me his “exercise ball.” That’s when things got interesting. She put Harry into a transparent rubber ball, a little smaller than a volleyball, and he took off, rolling all over the room. 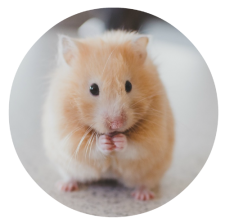 Now and then he – or rather, his ball – would bump into a chair leg or the sofa, and he’d simply go a different direction. Harry seemed to be having a blast in his transparent orb, and we were so entertained watching him roll through the house like a hamster-powered bowling ball. I imagined Harry probably loved the way that ball gave him roaming freedom he couldn’t get in his cage.

I hadn’t thought about Harry the Hamster in decades, but his memory came rolling back to me today as I stood in the driveway at 7 a.m., watching our oldest teenager back out by himself – his first solo driving trip to high school. Knowing all the things a 40-something mother knows about rush hour traffic, distracted drivers and the pitfalls of inexperience, I wanted nothing more in that moment than to put my son and his car inside a clear, giant bubble that would protect him all the way from our driveway to the parking space at school.

If we had a car bubble, he could make the occasional mistake and bounce harmlessly off any obstacle. He could see the world, roam around, feel the thrill of independence and come home safe and sound to find that his mother had not worried a brand-new ulcer into the lining of her stomach.

I have a whole new respect for what my parents must have gone through when my brother and I began operating heavy machinery. Because on some level they must have known we were idiots back then, way too confident in our own ability to conquer the open road.

This morning when our son left home, I felt like I might hold my breath until he made it to school and text me to signal his safe arrival. (He forgot to text me when he got there, by the way, which I’m pretty sure took at least a year off my lifespan.) Tell me, fellow parents who have already traveled this road, does this get easier? Because right now, our son’s newfound independence feels like a rolling anxiety attack for me.

Perhaps part of the issue is that I can’t fully see this new driver for the young man he has become – a guy who’s taller than me, whose voice sounds like Barry White, and who needs to shave way more often than he’s willing to. Part of my brain still sees him as the toddler taking his first few wobbly steps in the living room. Or the preschooler who got scared at the top of the tallest slide and needed my help to come down. Part of me will always see him as my baby who needs protecting.

But maybe that’s actually my need – not his. Perhaps what he needs now is the freedom to try new things on his own, to be an occasional idiot who learns from his mistakes – just as I did.

There’s no way I won’t worry. I’m guessing that trait is hard-wired into the maternal DNA. But I’m trying to see the upside of this new mobility. Yesterday he took himself to the library and fetched his own burrito from Chipotle. I’m no longer the unpaid Uber driver who sometimes gets requests for pitstops at the drive-thru lane of his choosing. Like so many parenting milestones, this one is both liberating and terrifying at the same time. I’m sure, in time, I’ll adjust.

In the meantime, if anyone has a giant, clear rubber ball big enough to fit a four-door car inside it, please let me know. We could really use one.