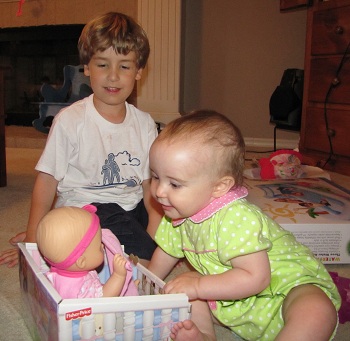 Remember that baby I wanted for so long? Well, she just turned 1. I know! I can’t believe it either.

I went to the doctor’s office a couple of weeks ago (I’ve been feeling kind of crummy for a couple of months now, but it seems maybe I’m just super-fatigued.), and they made me jump on the scales. It’s not a big deal, but c’mon – who wants that kind of trouble? This isn’t something they had done in the past so I jokingly protested about it.

“I just had a baby!” I said. Then I realized that it’s been quite a while since I gave birth. I’ve lost the weight, but I’ve also lost track of the time.

It seems like it was just a few weeks ago that I saw her sweet face and heard that lusty cry for the first time.

She knows what she wants and she goes after it, even if it happens to be at the top of the stairs. Yep, she only started crawling about a month ago and now she’s pulling up on the coffee table and climbing all the way to the top of the stairs, a nervous mama or daddy scooting up each step right behind her all the way to make sure she doesn’t tumble.

She’s reserved and has been known to scare away restaurant waiters with her level looks. But she’s also very social, so it stands to reason that her first words – mastered right after her birthday – were hi and bye. She can identify eyes, noses, mouths, ears and belly buttons in her books. She can point to her hand when you ask where it is and she does an impressive Rockette-like kick when you ask her to identify her toes.

Her laughs are as loud as her cries and no one makes her giggle and shriek as much as Mojo. Her big brother delights and infuriates her, which is, I suppose just as it should be.

Maybe you’ll recall that one of the reasons I wanted this baby so badly was so that Mojo wouldn’t be alone. I think he’s mostly glad she’s around. He talks to her and about her and he plays with her, sometimes giving her way more attention than she really wants.

But if there’s a downside to life right now, it’s that I feel like he gets the shaft far more often than I would like.

Am I the only mom of two who finds herself chastising one more than the other?

It’s hard, though. I don’t like it, but I’ve turned into a yeller. I yell because nothing else seems to get through. I get beyond frustrated when he repeats whatever his flavor of the moment over and over or until he tortures his previously content sister until she can only be comforted by my stopping what I’m doing and picking her up … and after asking nicely, then firmly and then with a warning for him to stop, finally I just burst.

He starts kindergarten in a few months and I’m sadder than sad that we won’t be together every day anymore. It’s the end of an era and I don’t want to see it go out this way. I want to make this better because I know our relationship will only become more challenging – that it will be tested in new and more complex ways – as he gets older.

I’m sure we’ll work through it, and it’s not as bad as all that. Not as bad as I’ve made it sound here, I’m sure.

There’s still plenty of games and good times around here. It’s just a dark spot in a field of light.

I want my babies to be friends. And though I know the difference between parent and friend, I want to be their friend, too.

Time is flying by too fast to miss out on all the fun.