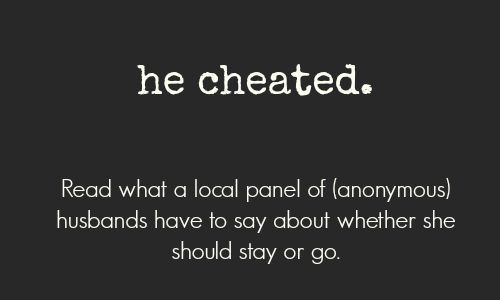 My husband had an affair about a year ago and I just found out in a roundabout way through a friend. When I asked him about it, he admitted it happened, but said he hasn’t seen the woman (or cheated on me with any other woman) since then. He says he wants to stay married, loves me and our kids and doesn’t want a divorce. I don’t know if I can trust him again. Do you have any advice for me? I’d like to stay, but I’m so hurt.

MAVERICK: He’s going to have to regain your trust and that will take more than admitting that he slept with somebody once he was caught nearly red-handed. To be honest, the way you describe him he’s not anywhere close to seeming to be sorry enough for what he did.

This is a huge red flag so proceed with caution and your eyes wide open.

I understand you’re hurt, anyone would be hurt in your situation. If you want to continue the marriage then that’s to your credit.

The thing is, he needs to want to continue it too, and he needs to be willing to take some serious steps to begin to rebuild your trust. This is not a situation where he gets to say “Oops, my bad. Sorry about that.” and gets to move on. If he’s unwilling to work on regaining your trust, well, he’s full of crap when he says he want’s his marriage back.

If he starts trying to deflect this back on you. If he tries to imply you let the infidelity happen. If he is pretty much anything but apologetic and willing to work hard and swallow his pride to get his home back, I wouldn’t put much stock in his sincerity or your chances for success.

The bottom like is this: He shattered your trust.

He has to genuinely seek your forgiveness and if his effort is sincere you have to forgive him if you wish the marriage to continue.

He can’t just pay lip-service to this and neither can you.

You can’t say you forgive him and beat him up for the next few decades and he doesn’t get to sulk or imply that he was anything but wrong in his actions and willing to walk through hot coals to regain your trust.

If you don’t  really resolve this issue of infidelity, and just do it half-way, your relationship may still exist but it will do just that, nothing more.  It’ll just limp along, year after year, and never really have a chance to heal and possibly grow moving forward.

Don’t go through this alone.

Seek professional help with someone you trust, a therapist or a member of the clergy you both agree on. If your husband is unwilling to seek help, he’s not contrite, and if he’s not contrite, he’ll cheat again so don’t invest any more time with him.

Rebuilding your marriage is going to be tough, really tough. He must be truly sorry and be willing to prove that with his actions. Your job is even harder, you must be willing to totally forgive. I’m not saying this happens overnight but this is the attitude you must start from.

MICHAEL: When we get married, we think we know how everything is going to unfold.

We envision our perfect children. We see our loving spouse continuing on unchanging from the day that we marry them.

Unfortunately, the reality is that we are all imperfect human beings.  We change over time and deal with issues that others may never know about.

We don’t see the curving path of life that lies in front of us with all its various challenges, pitfalls and setbacks.

We can’t really know what we’ll do in a situation until we’re there in it.  After we encounter them we can’t always be proud of our actions. But we can acknowledge where we are today and move forward.

So let me turn the situation around and ask me the same question as though you were the one that cheated.

Would you want to be forgiven?

If someone is worth loving, then they are no less worthy of that love after a mistake.

GRAY: Trust. Once it’s been broken things will never return to how they were before. Your relationship before this happened is broken as well. You have to rebuild a new relationship without ignoring the affair or merely keeping your fingers crossed that he won’t cheat again.

The first step toward rebuilding trust is to have a completely candid conversation. It doesn’t mean hearing the gory details, but you need to get an answer to every question you have. If you don’t know what made him cheat then you’ll never stop it in the future.

Don’t put a stranglehold on him. Had it not been for your friend, you would have never known about the affair and you may be fighting the compulsion to track his every move so you won’t miss the signals twice. Resist the urge. Hounding him down will just make you paranoid and won’t make either of you trust each other.

Keep track of how you feel as the two of you deal with this. You’re going to have some strong feelings at first, but if trust doesn’t seem to be returning over time you may need to rethink your stance. And it’s not only trust, how’s your self-esteem? Are you able to stand strong or do you feel too marginalized to respect yourself?

If conversation is a problem don’t be afraid to bring in a middle person. Counseling from a therapist or pastor can sometimes bridge the gaps and let you talk with each other without it turning into an argument. And if you’re spending your time name calling instead of really talking then you’re never going to gain traction.

If several months pass and you still can’t face the day without pain, anger and distrust then perhaps it’s time to go separate ways. At the end of this road you don’t need to feel like you’ve just accepted his cheating as a new burden you have to carry, you need to be able to confidently say “Yes, our trust was broken, but we’re too strong to have it break apart our family.”

If you have a question for our panel of husbands, please email it to them at mamas{at}nwaMotherlode{dot}com. Rest assured we won’t share your name in the Q&A.