By Kim Blakely, mama happy to be on diaper duty 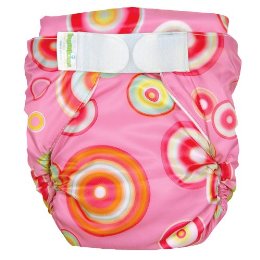 When I tell my friends I’ve decided to cloth diaper Moxie, the reaction I get is always something like, “Why?!” or “Ewww.”

Some of them just look at me, mouths agape, because they just don’t know what to say.

I tell them it’s not that hard, it saves bookoodles of money and it goes a long way toward helping the environment.

What I don’t tell them is that I’m almost obsessed. I browse cloth diaper websites every day, and when I finally can’t stop myself from ordering something, I anxiously await the sound of the mail truck each day until they arrive and I can prep them and put them on my sweet baby.

It all started when I was asked to review a GroBaby diaper for another website. I cringed, my thoughts running along the same line as my friends’ when they hear that I’m using cloth.

I was just sure that cloth would leak, that it would be stinky … and yuck, the mess. But I’m a good sport so I agreed to do the review and then I set out to learn what I could about cloth diapering in as short a time as possible.

Evidence that there are lots of people out there like me: online cloth diapering stores, review Web sites, chat rooms, etc. abound. I found lots of information about what I needed to do to get the diaper ready for use, and about how to clean it after it was –  ahem – used.

As I stumbled around on the internet, I felt like I was privy to a new world. FuzziBunz, BumGenius, Kissaluvs, Goodmamas, Rumparoos … aren’t those adorable names? And they are available in all kinds of colors and patterns. I was mildly intrigued.

I liked the GroBaby – and I was shocked to find that I had none of the leaks or blow-outs I’d lived through with disposable diapers. It was so cottony-soft against Moxie’s skin,  and she just looked so darned cute in it.

I read about health dangers related to disposables (dyes and dioxin and sodium polyacrylate, oh my), and that it takes several hundred years for a disposable diaper to decompose in a landfill, and all that pulled at my heartstrings. But what really got me was the potential effect on my purse-strings. The budget around here is tight, people. Really tight.

I thought I would just order a few more diapers and see how it went … and when those arrived, I thought I would order just a few more. And then, as Black Friday approached, sales went up all over those online stores and I was getting email updates from most of them. I shopped and shopped and shopped, and now I have enough diapers to last at least two days before washing. (And most of the diapers I have will fit her until she’s potty-trained. Amazing, right? I’m sorry to say that little factoid probably won’t stop me from buying more before then, but I also learned there is a big resale market for cloth diapers, so I’m not feeling too guilty about my habit. Yet.)

I don’t have just one kind of diaper in my stash – and each kind works a little bit differently. I have prefolds and covers (no pins necessary!), pockets that can be stuffed with extra microfiber or hemp inserts for more absorption overnight, all-in-ones, all-in-twos (like the extra GroBaby’s I ordered after trying the first one – they use covers with snap-in cotton soakers so you can use one cover a few times before washing), and I even have biodegradable disposable inserts for a couple of kinds of cloth diapers for when we go out and don’t want to lug extra stuff. I have diapers and covers in pink, yellow, purple, blue, green, orange (mandarin, to be precise) … there’s a shade to match almost any outfit.

I’ve tried explaining all this to my husband, but his eyes widen with fear at the thought of being left alone with Moxie during cloth diaper change time. I simplify things for him by just having a couple of diapers ready to put on, and I instruct him to just put the wet/dirty ones on top of the diaper pail for me to deal with when I get home. (I’ve yet to figure out if he’s genuinely afraid or just trying to weasel out of doing the dirty work, though he has mentioned maybe it would be better if he just used a disposable when his turn to change a diaper came along.)

Right now, Moxie is still almost exclusively breastfed, so the dirty diapers aren’t so bad. When she starts eating more solids, I might feel differently about diaper changes. But! There are flushable liners available, should I decide I just can’t deal with things otherwise.

Here’s the kicker. You’ll really think I’m crazy when you read this: I actually look forward to diaper laundry day. I know!!

I dump them into the washing machine straight from the diaper pail – I don’t have to touch anything icky – and run one cold rinse cycle and one hot wash cycle, throw them in the dryer and when they come out, they’re all fresh and fluffy and ready to go again. They’re easy to fold/stuff and they look so nice all stacked up. It’s kind of therapeutic.  A new start.

I think overall, I’ve spent about $350 on diapers and a laundry bag/diaper pail (which is actually just a 13-gallon trash can) and an appropriate laundry detergent (that was more complicated than I expected). Most of the diapers should last for two or three years. Compare that to the $18-22 I was spending every week and a half or two weeks on disposables, and it seems like a decent trade-off.

As much as I appreciate your letting me ramble about my strange obsession, I can’t let you go without seeing what’s got me into such a frenzy. Look at this: 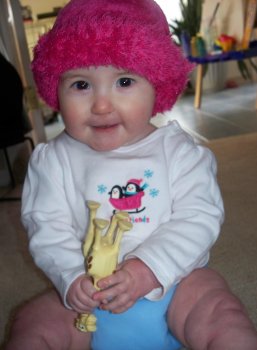 Cute, no? And this diaper is soooo soft, inside and out.