I’m going to take a little break from the usual discussion about my weight loss and healthy living journey to share a new wrinkle that has come up. And believe me when I say that my life already looks like it was dried on high, mashed into a laundry basket and left for two weeks. In case you’re interested though, I’ve lost 12.5 pounds! Should have probably been 20 by now, but I’m wearing my rose-colored glasses today…

My son started kindergarten last fall and my husband and I had every expectation that he would make friends quickly, charm his teacher, and excel in his academics. He has definitely fulfilled his promise in the academic department, but I was floored to receive a call from the school principal on the second day of his school career.

Since then we have had ongoing challenges and his teacher and principal have tried different things to try to help him “be in control”, none of which have worked on a long-term basis. His behavior is impulsive, there are unexpected mood swings and angry outbursts (yelling “NO!” at his teachers seems to be a fave). It just is NOT who we know our son to be. So, being the problem solver I am, I have been trying to figure out how to Fix It. (Just to be clear – his teachers agree with my husband and I that he doesn’t show signs of ADD or ADHD – the behaviors are not consistent or related to his ability to pay attention during instruction.)

A hypoglycemia test came back negative, and all of the behavior modification stuff that we’ve tried has been successful on and off, but not in any predictable way or consistently enough.

Then I remembered someone telling me that some foods can cause behavior problems in some kids. I don’t know who it was who mentioned it first, or when, but when I started looking for information online I found a lot of parents on a lot of online forums talking about the differences they saw in their children when they removed certain things from their diets. I decided I was onto something. The biggest offenders that affect behavior seemed to be wheat and food additives (especially dyes).

We started testing our son by removing wheat and food dyes from his diet and saw a fairly significant change very quickly. However, there have been a couple of frustrations. First, when I called an allergist to set up some basic allergy tests I was told without hesitation (or any discussion, for that matter) that behavior was not affected by allergies, and that it would not be recommended to “put him through all the testing.” Nevermind the daily frustration he is suffering through right now, huh?  Hrrmmm…. Okay… 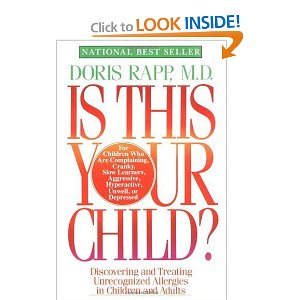 The other thing that’s turned up is that after the first couple of weeks of our informal diet restrictions, his behavior has gone back to previous challenging levels, primarily during  school hours. So… when I exhausted my Google options, I resorted to ordering a book called “Is This Your Child?” by Dr. Doris Rapp. Dr. Rapp is an allergist and has studied the relationship between allergies of all kinds (even some you wouldn’t consider – like feathers and disinfectants) and everything from behavior changes to muscle pain to handwriting changes.

The book lists foods and other substances to look out for, and helps the reader figure out how to correctly manage a diet if you’re trying to discover trigger foods. It also includes a ton of case studies from patients she has actually treated in her practice. It’s a big book, and wasn’t in stock anywhere I could find locally, so if you want a copy don’t be afraid of the size and go ahead and order online.

I think I’m going to add a few other things to the elimination list at our house – milk for one, and see if that helps. It’s going to be a lot of trial and error I think. It’s a pain in the butt to try to feed a six year old a diet without wheat, let me tell you! And since we’ve started adding yogurt and cheese to his lunches, I’m sure it will get even harder when that is out… but if it helps, it’s worth it. I’ve been wanting to do more home cooking… I guess I wasn’t specific enough about my intentions when I put that wish out for the Universe to hear.

Are any of you dealing with allergies in your home? What about similar issues with behavior that you can’t seem to find the source of? I’d love to hear from you!