28 Therefore, since we are receiving a kingdom that cannot be shaken, let us be thankful, and so worship God acceptably with reverence and awe ‘   ~   Hebrews 12:28 (NIV)

In the solar system, the planets nearest the sun are blazing hot while the ones at the opposite end (like Pluto) are freezing. The hallway of the English department where I teach is exactly like the solar system. The only difference is that instead of the sun, we have The Library and instead of Pluto we have The End Door. The Spanish teacher’s room is Mercury and stays at a constant 88 degrees. My classroom (at the other end) is a block of ice like Neptune.

I kept telling Susan how cold my classroom was but she was difficult to convince. So I went to a department store and bought a digital thermometer that keeps track of the “highs” and “lows” each day. Yesterday by the end of the day, it had warmed up to a frosty 58 degrees Fahrenheit. But for most of the day it was 51 degrees. Brrrrr.

I’ve been thinking a lot lately about Ma Ingles in the Little House on the Prairie series of books. Whenever something bad happened, she would always say, “There’s no great loss without some small gain.” It sounds trite, but there really is a lot of truth in that adage. Usually when something happens that’s inconvenient, there’s another (small) thing to be gained.

For instance, if your classroom is freezing, it affords you an opportunity to be able to wear really cool clothes. Living in Mississippi is kind of like living in the tropics. Although there are exceptions, most of the time it’s warm here, and people wear short sleeves. But when you teach English in an icebox, you 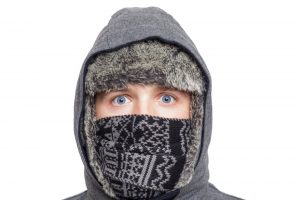 can wear layers of corduroy and wool, like the characters in a sophisticated British film. I’ve been known to teach literature while wearing a herringbone jacket, an overcoat, an Irish riding cap, and fingerless gloves. If you’re going to fight frostbite all day, you might as well make a fashion statement. None of my students think it’s the least bit odd because they’re freezing, too.

But just yesterday I noticed the greatest benefit of all. Lately I’ve been making a sandwich and eating a banana every day for lunch at school. I realized that my loaf of bread was (much) past the due date, but it was still fresh as the day I bought it. And the bananas were two weeks old but hadn’t yet turned brown. I realized it’s because I’ve been keeping all my food in the refrigerator — my classroom.

This year has been a tough one, full of great losses and endless aggravations. But because of the love of our Heavenly Father, there are always blessings and benefits. Your job this week is to look for them because gratitude is the pathway to joy. After all, you don’t want to be left out in the cold.

Dr. John L. Cash is the “Country Preacher Dad.” He was raised in Stuttgart, Arkansas, and spent almost 35 years being a country preacher in the piney woods five miles south of the little town of Hickory, Mississippi. He’s currently on a sabbatical from the preaching ministry, and is an English teacher at the Choctaw Tribal School. He and his lovely wife, Susan, live in a brick house in town (where the Siamese cat has decided it’s too cold to venture outside.) You can send him a note at countrypreacherdad@gmail.com.