Yesterday I saw something I’ve heard about all my life but had never actually seen. Next to the sink in the teachers’ lounge was a can of “Bab-O.” It’s an old brand of bathroom cleaner, the gritty kind people used to use to scour the bathtub. 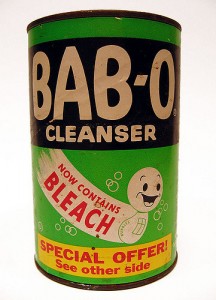 When I was a little boy, all my older relatives talked about Bab-O quite a lot. Specifically, they’d say, “John, if you ever say that word again, I’m going to wash out your mouth with Bab-O.” The threat sounded serious, so I’d clean up my conversation in a hurry. Even though I wasn’t sure if any factories still manufactured Bab-O, I didn’t want to take any chances. After all, there were lots of other kinds of soap around that could be used to wash out my mouth. Besides, I realized my language wasn’t good, and I needed to change it.

Is it just me or do you also notice how common bad language is these days? When I was younger, I wasn’t surprised to hear sailors and construction workers “turn the air blue” when there were only a bunch of guys around. But lately it seems like it’s spreading to the masses — even among Christian people. It’s especially shocking to me to hear a woman let loose a string of profanities, but I hear it whenever I’m out and about. Things have really changed over the past few years.

Maybe the constant use of profanity on television, in movies, in music, and on the internet has made these words less noticeable than they used to be. But we can’t blame the whole problem on that alone. When you get to the root of the matter, the problem is a spiritual one. Jesus said “from the overflow of the heart, the mouth speaks.” (Luke 6:45) If you use bad language and talk about immoral things, it says something about your heart — whether you admit it or not.

All the soap in the world isn’t enough to clean up our language or make it okay when we “talk ugly” about other people. What we really need is to ask the Saviour to cleanse our hearts. When our hearts are clean, our words will also be beautiful.

Dr. John L. Cash is the “Country Preacher Dad.” He was raised in Stuttgart, Arkansas, and has spent the last 31 years being a country preacher in the piney woods five miles south of the little town of Hickory, Mississippi. (On week days has a desk-job at a public school, where he used to teach Latin on closed-circuit-television.) He and his lovely wife, Susan, live in the parsonage next door to the Antioch Christian Church (where we got a little bit of much-needed rain this week.) Their kids include Spencer (age 25), his wife Madeline (age 25), and Seth (age 22), and his wife Leanne (age 21). You can send him a note at brotherjohn@ilovechurchcamp.com.