The dictionary defines an “overture” as  “an introduction to something more substantial.”  Orchestras have overtures at the beginning of long symphonic works. Parents and children make them, too, in the process of being a family. Allow me to illustrate.

When Seth was 15 years old, he and I didn’t “chime.” We didn’t speak much, and when we did we had arguments instead of conversations. With the passing of time, I can’t really remember why we didn’t get along; I don’t feel like digging through it because it’s painful to recall. It’s really kind of hard to believe it happened. We are so close now, and all our dealings are happy and good. But at that time, it was horrible. I guess it’s just the natural result of what happens when you mix together teen-angst and middle-aged-geezer-ideas in close quarters.

One day during the period when our relationship was at its worst, I was shopping for a get-well card for a church member. In the process I ran across one of those fancy Hallmark greeting cards that plays music when you open it. Even though the card was expensive, and there was no special occasion (plus I was mad at my younger son), I made an impulse decision to buy the card for Seth. It seemed like something Seth would love. Plus, I hoped it might make things a little better.

The song that the card played was “Country Boy” by Johnny Cash. Seth and I both like Johnny Cash because he was awesome and also because he is our distant cousin. The lyrics of the song were very apropos for my country boy, Seth, too: 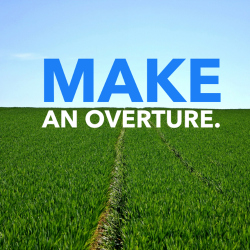 You get a wiggly worm,
And then you watch him squirm.
While you put him on a hook,
And you drop him in a brook.
If everything’s gonna turn out right,
You’re gonna fry fish tonight.

Well, after I gave Seth the card, we still didn’t talk much. And we really didn’t get along any better. But something very nice happened. In the middle of the night when I was in bed, sometimes I would hear a sound. It was Seth listening to the song in the greeting card. He would open the card over and over.

It may sound dumb, but that meant a lot. Seth and I didn’t get along, and we didn’t agree on much. But it was nice to know that we both liked Johnny Cash and “Country Boy” and the Hallmark Card. It wasn’t a cure-all, but it was an overture — an introduction to something more substantial.

Overtures are good things. You should make some this week. You’ll probably have a lot of regrets in your life. But I guarantee this won’t be one of them.

Dr. John L. Cash is the “Country Preacher Dad.” He was raised in Stuttgart, Arkansas, and has spent the last 31 years being a country preacher in the piney woods five miles south of the little town of Hickory, Mississippi. (On week days has a desk-job at a public school, where he used to teach Latin on closed-circuit-television.)  He and his lovely wife, Susan, live in the parsonage next door to the Antioch Christian Church (where the weather is finally a little cooler this week.)  Their kids include Spencer (age 25), his wife Madeline (age 25), and Seth (age 22), and his wife Leanne (age 21). You can send him a note at brotherjohn@ilovechurchcamp.com.