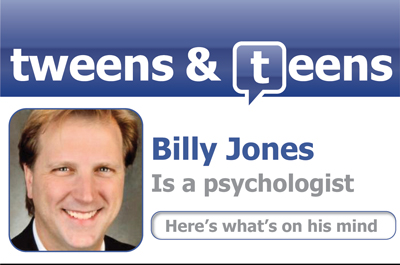 Note from the mamas: We’re re-posting this Tweens & Teens because it’s such an important topic that parents often dread and avoid, for obvious reasons. It originally posted in November of last year, and it got several comments from local moms. If you missed reading it the first time, we hope it offers some insight and guidance. Dr. Jones will be back soon with a new Tweens & Teens article.

Anybody who believes that the way to a man’s heart is through his stomach flunked geography. ~Robert Byrne

Welcome to the March edition of Tweens and Teens. For this month, I’ve been asked to write about when to talk to your Teens and Tweens about sex. I don’t know who requested this from Gwen and Shannon, but you certainly picked a tough one. Great question, but very tough. 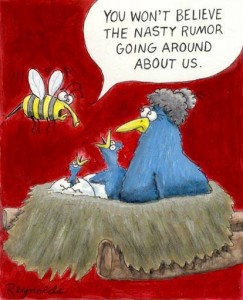 Okay…let’s give it a try. First off, I believe that when children ask you a question, you should give them an open and honest answer. After all, if they’re old enough to ask, then they are old enough to hear the answer — MOST of the time.

My 11-year old son first asked what “f*ck” meant when he was 7-years-old (2nd grade). WHAT?? We were coming out of the movie theater and he just asked me right out of the blue. I stayed calm and did not overreact, though how on God’s green earth I did that is beyond me. When I asked where he heard that word, he replied, “I just read it on the bathroom wall at the movies.” (Time for a new paint job in the theater restroom.) That, by the way, is not the age to explain the birds and the bees. Seven-years-old is too young.

So…I offer the following advice: When your child asks you a question in a serious manner, not casually mentioning a word here and there, then it’s time to tell them. Even if it’s about sex.

FYI: Here’s a rule-of-thumb I use for understanding a child’s level of maturity. Please note, I didn’t get this from a textbook, which will become quite clear when you read it. I just thought of it several years ago with my own children and it seemed logical both then and now. Here it is: If a child can discuss, without laughing or making jokes, another person’s poo-poo, then they’re starting to mature. Try it. Mention someone else having a poop problem and, if they actually discuss this with you, then you may start to consider talking to them about more serious subject matter. Don’t laugh, I used this idea with my older son and it worked beautifully.

What about the youth of today? When are they having sex? I found the following statistics and thought they would be helpful to share:

Percent of population having already had first intercourse:

Look at that last table, 16.9 years is the average age of intercourse for a male. At 16 years of age, I had not had my first date yet, much less sex. I was 18-years-old when I went out on my first date. Not because I couldn’t find anyone, but because I didn’t know what to do or say. My parents never discussed any of this with me. Of course, I knew about the physical act of sex (from the magazines my friend’s brother had stashed under his bed), but I hadn’t learned the proper words or proper way to ask someone out. After all, Georgia boys, like me, are gentlemen.

Though not a common practice, there are times where I have to discuss sex as a part of my job. Asking personal questions to teenage girls can be difficult, but it’s necessary. I have had several (probably 5 or 6) teenage females come through my office who have actually talked about having oral sex on the school bus…BUT…“It was not real sex because it was only oral.”  UMM, EXCUSE ME?  This cannot be what they said. Oh, yes it is. And, yes, there were other people on the bus, sitting right by them.

I’ve talked with a few girls, and 9th or 10th grade seems to be the consensus time that they begin to feel the most pressure from their boyfriends to have sex. Until then, it was “making out” or “hooking up”.  Different terms, same meaning. This involves kissing and petting but not actual intercourse. One young lady talked about “hooking up” on the church bus on the way to a camp. Apparently, there were blankets to help cover up and hide the boyfriend’s roaming hands. What is it about buses? And a church bus?

Also, don’t forget sexting. We talked about this in an earlier article and, in the words of one girl I asked, “Sexting is a HUGE thing right now, especially if you aren’t going to see them for a while.” Parents need to remember that these sexting items will be deleted and, when you examine their cell phones, which you should do regularly, you will notice gaps in dates and times. It does not take Sherlock Holmes to figure out that something is not right. My son knows that we will regularly (and randomly) check his texts. If there is a day or time period that is deleted, then his phone is taken away. No questions, no excuses, no nothing.  Gone.

Parents should also remind their daughters that no matter what the boy says, it is a lie. He WILL show his friends the pictures and messages that have been sent, and he will NOT delete the sex images or messages until he has to do so.

A trick that I recently heard about texting boyfriends and girlfriends is putting a different name from the actual person. So, if the parents like John, but not Sam, then you enter Sam’s phone number with John’s name. As such, if you are monitoring their cell phones, you may see one name, when they are actually texting the person we don’t want them to text. So…get phone numbers with names and double check to make sure they match up. Yes, I am paranoid and you should be, too.

Dr. Tony Evans, the pastor of a “small” church in Dallas, once discussed how he prepared his daughter for dating. I thought it was MARVELOUS! Here’s what he did: First, he called her on the phone and asked her for a date. That evening, he walked up to his own house, rang the doorbell, and asked if she was ready. He took her to dinner and a movie and then brought her home. He walked her to the front door and told her goodnight. He then said, “If any boy does less than what I have just done, they are not the right person for you.” Awesome!! What a way to show your daughter what to expect from her date.

Also, when it’s time to talk about sex, don’t be ashamed or embarrassed to truly discuss it. Sex with your spouse is what God intended, and it’s much better having them hear it from you than from someone else, or from a magazine, DVD, or on the computer.  Or…experimenting on a bus.

Note from the mamas: If you have a question for Dr. Jones, e-mail it to mamas@nwaMotherlode.com and he may answer it on a future installment of Tweens & Teens. To comment on the article above, click the big orange button below.