The fall season gets a ton of attention around here. The leaves put on quite a colorful show before they drop off for winter – going out in a blaze of fiery reds, oranges and golden yellows. But as comedian Jim Gaffigan puts it, this awe-inducing display is part of a seasonal death march for the leaves, as the trees starve them of the chlorophyll that once made them green. It’s gorgeous and a tad depressing all at the same time. 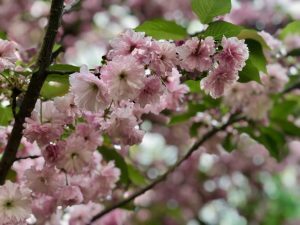 Maybe that’s why Spring is my favorite time of year here in the cul-de-sac where we live. Lately it looks like this place is dressing up for a summer garden party. With a flash of lavender and a pop of pink, the landscape is accessorizing its bland winter outfit with touches of color designed to get attention.

Unlike Autumn, Spring is about beginnings. And it never fails to catch me by surprise. What looked utterly dried up and dead two months ago suddenly sprouts tiny sprigs of green as if to say, “Don’t count me out! You only thought I was gone, but I’ve been here the whole time – just waiting for a warmer day.”

Across the street, the buttery yellow of day lilies demands attention. Next door, a flowerbed full of azalea bushes are on the verge of bursting into a lovely sea of lavender. And there’s a patch of tulips standing tall a few doors down, reminding me how much I love these cheerful yet short-lived flowers.

Even the birds are chattering about the changes. I hear their melodic conversations in the morning when I let the dogs out to “water the grass,” which is becoming more lush and vibrant green each day. Yesterday I walked around the yard and noticed that our hydrangea bushes are leafing out again, an early promise of the deep blue flowers still to come. 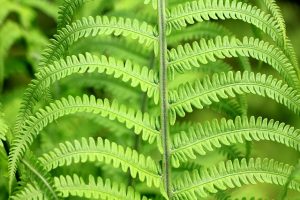 Along the back fence are huge forsythia bushes bloomed out in a shade of yellow as bright as the sun. And on each side of the front door, there are big, leafy ferns in a welcoming shade of green.

In two boxes near the ferns, we nestled plants called “Velvet Elvis” into a fresh bed of dark potting soil. Last summer, these plants shot toward the sky with spikes of purple – every bit as showy as their namesake. We enjoyed the long-lasting blooms so much that we bought them again this spring so we can watch an encore performance.

But the most impressive evidence of spring is once again the small redbud tree that shades part of our driveway near the garage. The tree has been here much longer than we have – more than 13 years now. During the winter, it doesn’t look like much because it has been through some tough seasons in its life.

When our kids were little, it had countless basketballs and tricycles collide with its small but sturdy trunk. And one year a severe ice storm weighed it down so much that the trunk began to split near the lowest fork of the tree. Everyone said we’d lose it, that it wouldn’t be able to survive that kind of trauma.

But my dad, who was a tree trimmer for more than 40 years, gave the little tree more credit than most. Using a tourniquet of sorts, he cinched the tree’s wound together as best he could using belts and bungee cords. Then we waited.

When Spring returned, so did the tree. Even though it droops a little lower and shows scars of the icy assault it suffered, it fights its way back – year after year. Even its knotty, gnarled trunk is sprouting tiny sprigs of bright purple this season, impressing me once again with its fortitude. It’s the little tree that could. I hope I’m that scrappy and strong when I’m as old as that tree. 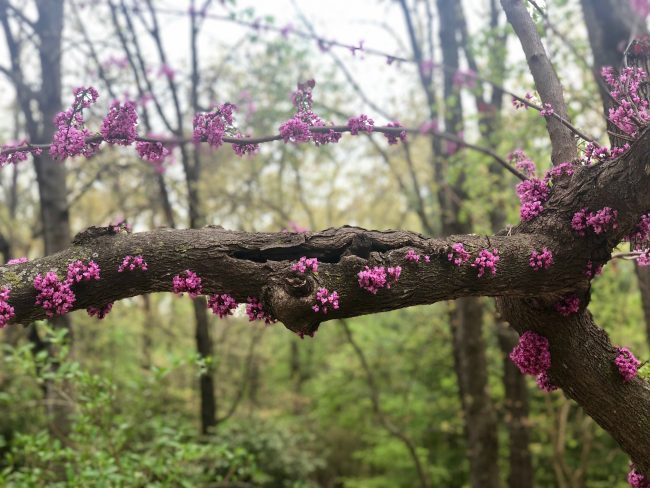 Yes, the showy Fall finale is fine. But this season is even better. Give me a vibrant green spring splashed with color and bursting forth with new life.