When I was in my early twenties and working as an assistant in the newsroom of the local paper, the editor tossed me an assignment late one afternoon. Not an assistant assignment. It was a reporting assignment. I was instantly pumped and petrified.

It was a few weeks before Christmas, and he wanted me to go to the city’s holiday light display on the downtown square and report on what was going on – a basic roundup of the festivities offered for the season. Easy, right?

But my paranoid mind focused on the fact that this was my very first writing assignment. I worried that if I turned in a lousy article, I’d be fetching Cokes for busy editors and typing obituaries for the rest of my career.

I walked to the town square armed with a notebook and a tiny recorder with a miniature cassette tape inside. I had my thumb on the “record” button as if it was a trigger. I was ultra-serious and so anxious. You would’ve thought I was about to cover the first moon landing in person.

I walked around under a canopy of twinkling lights, making descriptive notes and listing the activities going on around me. My editor had said I should interview someone, so I asked the guy driving the holiday horse and carriage. 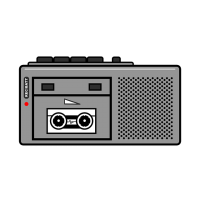 Finding it impossible to scribble notes while asking questions during a bumpy carriage ride, I pulled out the tape recorder and pressed record.

After climbing down out of the carriage and thanking the driver, I rushed back to the newsroom to write the story and get my first official byline. I pressed “play” on the tape recorder and panicked when I could barely make out any of the words. What I heard was a jumble of the holiday music mixed with the loud “jing-jing-jing” of the jingle bells strapped to the horses. But the most distinctive sounds drowning out the words were the loud “clop, clop, clop” of horse hooves.

I dropped my head into my hands as if I’d just blown my chance at the Pulitzer Prize. But there was no way I was missing my first deadline, so I wrote the story using the few details I’d written down and then relied on memory to incorporate the interview. I turned in the story, and the editor said it was fine. I lived to write another day.

That first experience taught me something important about writing. Notes and recordings are helpful, but it’s also important to simply be in the moment so you can help readers get a truer sense of the experience.

Fast forward about 25 years and here I am, filing another short report about an experience that has become a sign of the times – a trip through a drive-through Covid-19 testing site.

My family has been so careful since this pandemic began, but last week we got a call saying that a close friend we’d seen had tested positive. She had no symptoms. Felt just fine. But there it was – a clear example of why and how a virus like this can spread so far and so fast. 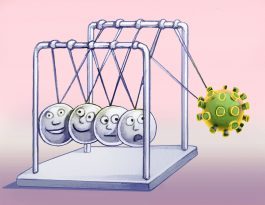 When I first got that call, I felt something turn over in the pit of my stomach as dread mixed with fear. What if my parents had it? What if one of the kids got really sick? Suddenly the thing we’d spent months hearing about on the news had walked into our home. We all had to be tested.

Arranging for the test wasn’t easy. On my first try calling a local Covid hotline, I was told that, because we had no symptoms, we couldn’t get a test – a barrier that seemed crazy since our friend also had zero symptoms and tested positive anyway. But then our family doctor stepped in and ordered the tests, and the next morning we loaded up three kids and two senior citizens and headed for the drive-through testing site.

I hope you won’t need to be tested, but if you do, here’s what it was like: We pulled into a circle drive near the medical clinic where a team of nice people in what looked like Hazmat suits greeted us. We put the car in park, engine still running, and answered their questions. Then they pulled out their infamous swabs and went to work.

Because I know myself, I closed my eyes as they reached for the swab, deciding it was best not to see the thing that was about to enter my face. I concentrated on my breathing and held very still. Thankfully, the test we had wasn’t the one that travels roughly two miles up into your sinuses. In fact, I didn’t think it was bad at all. Each nostril took about 15 seconds to test and involved a little swab swirling, which tickled in a weird way. But painful? No. Not in my humble opinion (and I’m generally a real weenie, who once passed out after getting my finger pricked.)

Then we went home and waited for what felt like an eternity but, in reality, was four days. I’ve heard reports from others who waited more than 10 days for an answer, which must’ve been maddening.

The test results? Negative. All of us. Thank God, I breathed. It was the most positive “negative” I’ve ever received.

And now we must be even more careful because a negative test result is only good for a day, and a vaccine is still months away. Until then, I hope that if you need a test one day, you won’t worry too much because if a wimpy writer like me can handle it, then you can, too. And I hope that you and the people you love will get positive news about a test result of negative. Stay safe out there, friends.