Every now and then I run across a seemingly random fact that occupies more headspace than it probably should – like elephants can’t jump. (It’s physically impossible for them.) Or that certain types of trees won’t let the tips of their highest branches touch the trees next to them – a phenomenon called “crown shyness.” And this week I’ve added another odd fact to my growing collection: A new study finds that octopuses are one of a small group of animals that can purposefully throw things at targets.

The study, published by a scientific journal called PLOS ONE, used more than 20 hours of underwater video recorded in Jervis Bay, Australia at two spots so popular with octopuses that they’ve been nicknamed “Octopolis” and “Octlantis.” Researchers say these spots provide great shelter and have plenty of good food.

Generally speaking, however, octopuses are loners – famous for cancelling dinner parties and staying home alone. But even crowd-averse humans are willing to visit a resort with great amenities and delicious food. That’s what draws groups of octopus to places like Octopolis. 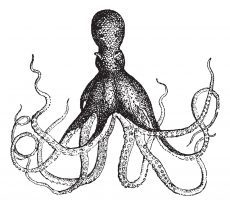 The species observed in this study – Octopus tetricus – is known as the “gloomy octopus.” Why so gloomy? The study doesn’t give answers to that. Emotional baggage from their childhood? Maybe it’s carpal tunnel of the tentacles? Impossible to guess. But the point is that these octopuses are irritable and annoyed– like the Eeyore of the sea.

In the video, when one octopus invades the personal space of a neighbor octopus, the neighbor gathers silt from the ocean floor and throws it at the offender in what looks like an underwater dirt bomb. But here’s the crazy part: The octopus doesn’t use a tentacle – not even one of them – to hurl the dirt bomb. Instead, it uses tentacles to gather the silt and then uses its “siphon” (which is like a water jet under its body) to rapidly propel the dirt at its target.

One of the researchers, Dr. Godfrey-Smith, said “there isn’t really a word for what the gloomy octopus does.” But don’t worry, doctor, because I’m a professional writer therefore I will give this aggressive attack a name – the jet-fart.

Additional video footage showed gloomy octopuses jet farting on each other, nearby fish, and even the stationary GoPro video camera being used to record them. (To be fair, I’d also throw dirt at a camera being used to spy on me. Clearly, Octopolis needs a privacy agreement.)

In one of the throwing incidents, a male octopus tried to get handsy (times eight) with a female octopus, so she jet-farted a dirt bomb at him until he backed off. Clearly, he had it coming. A guy has to learn when to keep his 8 arms to himself.

The gloomy octopus is the first sea creature to join the small group of animals who can throw things at targets. In addition to humans, the others in this exclusive club include chimps, monkeys, elephants, mongooses, and birds. Humans, however, are the first to turn throwing things into lucrative sports industries like baseball, basketball, and football.

But who knows? If octopuses could learn how to make TikTok videos promoting their ability to jet-fart dirt bombs at each other, humans would flock to Octopolis to turn it into a spectator sport. We’d just have to figure out how to eat hot dogs and drink beer under water. Elon Musk would probably come up with something.

I’m not saying my idea is guaranteed to turn the gloomy octopus into a professional jet-farting athlete worth millions. I’m just throwing it out there.