Last night I opened a bathroom drawer to reach in for a clean hand towel. There wasn’t one there. I sighed and shuffled toward the laundry basket in the next room, where the folded towels had been sitting in procrastination purgatory for at least two days – clean but not yet put away.

I grabbed a towel, headed back to the bathroom and heard a voice in my head say, “One of these days I’m really going to get it together.” Somehow, this made me feel 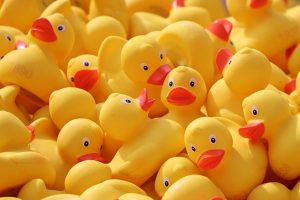 better – optimistic that once I reached that elusive “someday,” my proverbial ducks would be lined up in an organized row, each one carrying a clean, folded hand towel.

Just for the sake of research, I decided to ask the little voice in my head to list the things a bona fide grown-up would do to “get it together.” After all, you can’t get it together if you don’t know what “it” actually is. Here’s what I came up with. Feel free to add your own ideas to the list.

A grown-up human who has got it together does the following:

Doesn’t my future self who has it all together sound ultra-competent? If I ever meet her, I’m going to be super impressed. I’ll probably have to ask to borrow her hand towel.