Yesterday I walked into the bathroom to put away a stack of folded towels. As soon as I put the pile of fresh laundry on the shelf, I felt like I was abandoning my squeaky-clean baby in a dirty bus stop. I looked around that bathroom – the one shared by our two teenage boys – and wondered at what point I’d failed as a parent.

I know that most teenage boys aren’t known for cleanliness and attention to detail, but mine have been doing chores since they were old enough to ask for Skittles. And I really believed that, if I made them clean up their own messes, they’d grow up to become accustomed to a certain level of clean. Neatness would become natural. That was my plan. 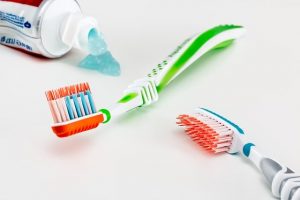 But the plan must have taken a wrong turn at Albuquerque. Because I think what happened instead is that the boys just got more comfortable with a higher threshold of gross.

After depositing the folded towels into the linen closet, I took a close look at the bathroom I’d been avoiding. On some level, I must’ve known it would be bad in there because I hadn’t taken a hard look at it in a long time. I treated it like a chemical spill – it might not be toxic, but why take a chance? Just steer clear of it and hope for the best.

Every couple of weeks, I’d hand a tub of Clorox wipes to the boys and tell them to go in there and disinfect everything. I figured that would keep the filth at bay.

But yesterday, after noticing the accumulation of clutter on the bathroom vanity and the layers of dried toothpaste on the sink, I’d had enough. I grabbed a trash bag, a bottle of cleaner and a few rags. I was going in.

In all honesty, this kind of “cleaning fit” happens sometimes when I’m actively procrastinating a writing assignment like I was yesterday. It’s amazing how something as silly as expired medicines on a bathroom shelf can suddenly attain emergency status.

“How in the world am I supposed to go downstairs and concentrate on my work when there’s all this stuff up here, just taking up space and looking terrible? What if the boys need some Pepto Bismol one night and they take a swig out of this dusty bottle that expired in 2014? That’s disgusting. And look at those baseboards! How many years of dust and God-knows-what are caked on those baseboards?”

So instead of waging war against the blank page, I marched off to the bathroom to conquer the clutter, blast the baseboards and scrub the place sterile.

Having committed myself to a deep clean, I emptied every drawer and cabinet, which led me to this realization: All those acne ointments and hair styling products I’ve bought for the boys over the past several years in hopes that they actually cared about their appearance? They’ve hardly touched them. Because they were all still there, stuffed into the back of drawers and cabinets. I’m guessing those products got used two or three times total and then never again.

In addition to a product graveyard, I also found what looked like hundreds of tiny rubber bands that the boys were supposed to be using on their braces. Suddenly I understood why the orthodontist and his nurses always gave the boys that “I’m not mad. I’m just disappointed” look every time we went for an appointment.

I tossed all the abandoned products, expired medicines, and renegade rubber bands into the trash bag. Then I started scrubbing. And sweeping. And mopping. And wondering how toothpaste and soap and shampoo and who-knows-what-else can end up all over the walls. It had been there so long that it had become one with the paint.

“Did something explode in here? Was it something orange and gooey? Should I stop cleaning and just burn the place down?”

Finally, after a few hours of work, I stood back and admired the results. Each boy now has a designated bathroom drawer where he will (in theory) put the stuff he uses daily. The countertop is now clear and clean. The mirror shines. The tile sparkles. The air no longer has the stench of trash mixed with sweat and teenage condescension.

Then I replaced all the worn-out bathroom towels and mats with new white ones that can be bleached from this day forward. Even the boys were impressed with the bathroom’s fresh new look. I told them they better keep it clean and organized from here on out. Because I’m not going back in there for at least five years.