Consequential. That’s the word that comes to mind when I think about all that has happened these past several months. Everything feels so… heavy. Even a routine trip to the grocery store feels like it could have dire consequences. I find myself holding my breath, nervous about what might happen next.

This year feels like the kind of thing future grandkids might ask about someday for a homework assignment: “Grandma, what was it like to live through the global pandemic of 2020?”

But here’s the thing. We’re not the only ones who’ve lived through consequential times. Not every year is as dramatic and headline-grabbing as this one, but even seemingly small, ordinary things can have huge effects on the world.

To give a few examples of this truth, I turned to a fascinating little history book called “Napoleon’s Hemorrhoids.”  In the book’s introduction, author Phil Mason writes that “Great sweeps of history boil down to small moments of chance.” One of the most infamous of those “small moments” is one that Mason used as the title of his book.

Mason writes that Napoleon may have lost the Battle of Waterloo partly because he had a nasty case of hemorrhoids on the last day of fighting. On a normal day, he would’ve been on his horse supervising troop movements. But when a person’s caboose is hurting that bad, he doesn’t want to sit in a saddle. So, the attack Napoleon had planned for early morning didn’t end up happening until the middle of the day, which may have given his opponents the advantage to win the close fight. If not for the hemorrhoids, the outcome could have been vastly different.

Here’s another incredible example from the book of how a small moment triggered a huge impact. Just before the Titanic set sail, a member of the crew named David Blair was replaced by someone else. It was such a last-minute change that David forgot to give his replacement the key to his locker in the crow’s nest.

It just so happens that the locker held the ship’s binoculars. After the ship sank and an investigation was done with one of the surviving lookouts, he confirmed that they didn’t have binoculars on the voyage and, if they had, they might have seen the iceberg in time to get out of the way.

This next small moment isn’t nearly as sad, I promise. If a Swiss man named George de Mestral hadn’t taken his dog for a walk in the Jura mountains, you and I might still not know the convenience of using Velcro. As dogs are prone to do during walks, George’s dog ran through the woods and emerged with cockleburs in its hair. George became fascinated with how difficult it was to get the cocklebur out of the dog’s hair, so he took it back to his lab to look at it under a microscope. That’s when he noticed that cockleburs have tiny hooks that help them cling to anything soft – a fact that gave birth to his invention of Velcro.

And here’s one last moment for the road. A mistake in a math problem might be the reason your parents (and mine) forced us to eat spinach. In the 1870s, a German scientist wrote a paper about the iron content of vegetables, suggesting that spinach contained an unusually high amount of iron. 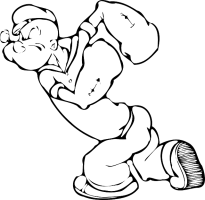 In the 1930s, the cartoon Popeye the Sailor Man featured a song saying, “I’m strong to the finish ‘cause I eats me spinach.”

Then in 1937, a mistake was found in that original paper by the German scientist. It turned out he’d put a decimal point in the wrong place, which made it look like spinach has 10 times more iron than it actually does. Oops. Sorry, Popeye.

Somehow, reading about these small moments made this year feel a little less crazy. After all, even small things like hemorrhoids, a key, a cocklebur, and a decimal point can create giant ripples in the stream of history.