Today I told my dad, for what is probably the 20th time, that the reason he’s having trouble talking is because he had a stroke. It happened on February 10th, but he doesn’t remember.

He also doesn’t remember the trip to the Emergency Room or the way a team of doctors and nurses descended on him to quickly assess what had happened to him during the night.

He doesn’t remember the three days in the hospital that followed. He doesn’t know that, for the first few days after the stroke, the only word he could say was “No.” He has no memory of the stroke rehabilitation center he tried to walk out of a few days later.

I wish I could say it was the stroke that took those memories and that they’ll likely come back. But they won’t. Even before the stroke – which thankfully was small and only impacted his ability to speak – my dad has been slipping into a world of his own. He has vascular dementia, diagnosed six years ago.

Until now, I haven’t written about it – partly because I didn’t want it to be true and mostly because my dad was still reading the newspaper most mornings. And in his mind, he was fine. In fact, his mind tells him he’s still working every day as a tree trimmer and landscaper. It tells him he’s still strong and able. I didn’t want to write something that, to him, would sound like a lie.

I was with Dad the day of the diagnosis. I remember the verbal test the doctor gave him in the exam room: “What year is this?” “What city are we in right now?” “Try to subtract 7 from 93.” “Who is the President?” I remember the way he looked at my mother and me, waiting for us to help him with the answers. When we didn’t, he made a joke and changed the subject. That has been one of our blessings – that the disease hasn’t taken his sense of humor or the mischievous glint in his eye. He still aims to be the most entertaining person in the room, and he usually is.

But those of us who love someone with dementia know it’s not always easy to keep laughing. Dementia is nearly impossible to pin down and predict. On bad days, there can be wandering, and there were a few terrifying moments when we couldn’t find him. Sometimes there’s a silent, glassy-eyed emptiness. Sometimes there are inappropriate comments made in public, stubborn refusals, or anger at the people trying to help. On the bad days, he thinks I am his sister instead of his daughter, or he refers to me as “that girl.”

But on the good days, and thank God we still have those, we get glimpses of who he was before this began. He emerges from the fog and delivers a perfectly-timed wisecrack. 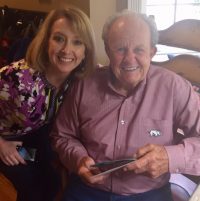 Or he’ll make an observation that makes it clear he’s really here in the moment. He’ll remember an old family story, or his light blue eyes will light up with recognition when I breeze through the door and say “Hey, Dad!”

Those good moments are such wonderful gifts, and they ease the anxiety of the question bumping around in the back of my mind: “Is this the year he will forget me entirely?”

I’m sure every family who deals with this disease has their own way of managing it. For us, we do it mainly by focusing on the good stuff. He can still walk a little. He knows who we are most of the time. With the help of speech therapy, his words are beginning to come back after the stroke. He can still live at home. He laughs. He seems happy. And we can give him his favorite science magazine every year for Christmas and the pictures in it are brand new to him all over again. (A little dark humor helps a lot with dementia.)

For the most part, we don’t remind him about things or expect him to participate in our reality. We try to merge into his – whatever it may be on any given day – and keep him content. If I didn’t need him to cooperate with his speech therapists, I wouldn’t even remind him about the stroke. Every time I do, he looks a little more skeptical of the story, although he goes along with it – perhaps just to keep me content.

To those of you who may be traveling this same road, I wish you as many good days as possible. And if you can’t get full days, I hope you get good moments – precious glimpses back to better times.

And on the bad days, I pray you’ll have the strength you need and that you’ll sometimes be able to laugh instead of cry. And even when the eyes staring back at you seem vacant, I hope you’ll remember that there are those of us who understand, who “get it,” and you are most certainly not alone. Godspeed.