When we brought our new dog home last summer, I expected the usual trials of raising a puppy – the house-training, the chewing, the short attention span. But I never imagined I’d have trouble giving him a bath.

I’d always considered myself somewhat of a professional when it comes to dog hygiene. When I was a kid, I’d always been the one to bathe our family dog. Then as a teenager, I got a job as a dog washer at our town’s grooming salon.

I’ll never forget that first day at work. The groomer led me out back to a fenced area and pointed to the largest dog I’d ever seen – a Saint Bernard named Eddie. “Give him a bath,” she said. “You’ll probably have to use that since the indoor sink isn’t big enough.” She motioned toward a horse trough and a water hose.

Shy by nature, I didn’t let my shock show. I nodded knowingly, as if it was the most natural thing in the world to bathe a Saint Bernard in a horse trough. As she disappeared inside to resume giving poodle cuts, I grabbed the bottle of dog shampoo, filled the horse trough with water and led Eddie over to the makeshift tub.

It’s not that Eddie minded the idea of getting wet. The problem was that Eddie had about the same energy level as a large brick. When I tried to coax him into jumping into the horse trough, he looked at me and slowly sat down as if to say, “No, thanks. It’s time for my nap.”

So I sweet-talked him, picked up his front paws and guided half his body over the edge of the trough into the water, thinking his back half would naturally follow. It didn’t. So I picked up the dog’s back-end and hoisted it up over the edge, which gave Eddie just enough time to flop his front legs back out onto the lawn.

This pattern continued for a while. I’d get half of Eddie into the trough, trying desperately to get his other half in before he had a chance to climb back out. I’ve often wondered if my new boss watched this comedy show from the window of the salon. Maybe it was a new employee hazing ritual – washing Eddie the gentle giant in a horse trough.

But I persevered and, after several attempts, got all of Eddie’s 150 pounds into the water. After a thorough scrubbing and rinsing, I took him inside and dried his thick, golden hair – which felt like it took roughly two years, give or take a month.

Having survived the bathing of a Saint Bernard so many years ago, I was certain I could handle washing our new puppy. But unlike Eddie the serene Saint Bernard, Cooper the Corgi puppy has a much stronger opinion about getting wet. His opinion is something along the lines of “This water is trying to kill me,” so he freaks out accordingly.

I tried calming him down during the first two baths, including giving him treats which he left floating in the bath water. I even Googled the problem and found a tip that said I should smear peanut butter on the shower wall, which was supposed to distract him long enough to get him washed. But all that did was force me to wash dog hair and peanut butter off the shower walls.

So last week, I let professionals handle Cooper’s most recent bath in hopes they’d know a few tricks I don’t. His hair was beginning to shed, and I’d just had my car professionally detailed – a Christmas gift from my husband – so I didn’t want Cooper riding in the car until he was clean. 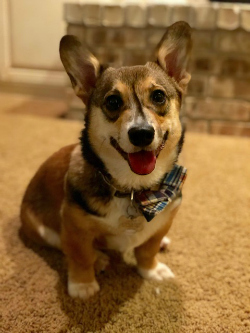 When I picked him up, even the groomers said Cooper has some serious hang-ups about baths, but they did manage to give him a de-shedding service that’s supposed to cut down on the amount of dog hair around the house. I was thrilled to hear the good news. I collected my dog and got in the car to drive home.

That’s when Cooper, who’d spent a good part of the day freaking out about doggie spa services, shook out his nervousness. When he shook, it looked like a hair bomb went off in my newly cleaned car. Light brown hair drifted down onto the seats, dashboard and pristine floorboards.

“It’s a good thing you’re cute, dog.” I put the car into gear and headed for our hairy home.