I did it again last night – stayed up way too late in the name of love. A rerun of a romantic comedy I’ve seen at least eight times came on TV, and, even though I can lip-sync all the important lines, I watched until the ending credits rolled.

Tom has seen me do this many times during our 18-year marriage. He usually glances at the TV, then looks at me, shakes his head and says “Again? You’ve seen it so many times.” To which I reply “And I enjoy it every time.”

Last night after the movie ended, I fell asleep wondering why I’m so easily sucked into a love story. When I’m watching one of these seen-it-a-million-times movies, the rational part of my brain says “Turn it off and go to sleep. You’ve got work in the morning.”

My heart brushes off my brain and replies “I’ll just watch until the first kiss.” Then after that scene, my heart whispers “Just watch until the breakup scene.” But then I can’t turn it off and leave the main characters lost and heartbroken, so I watch long enough to make sure they get back together, which usually happens at the end of the movie – hence the late-night habit.

Love stories are about drama and declarations, angst and affection. Love often has to struggle through misunderstandings and misplaced pride, baggage and break-ups. When two people can walk through that emotional minefield and hand over their hearts – either on screen or in real life – it’s remarkable. Maybe even miraculous. New love has its own brand of magic.

The only problem with new love is that it’s often plagued with push-and-pull syndrome. When I was in my early twenties, I had a string of relationships with a common theme: Someone was always pursuing and someone was always retreating, and the roles might reverse multiple times in a single month. It seemed to be more about leverage than love. There was an unspoken pressure to flirt but not cling. To be interesting but not overly interested. Those kinds of relationships go from affectionate to aloof (and back again) faster than you can say “commitment issues.”

I’m grateful God arranged for my last blind date in 1998 to be with someone who made me feel safe enough to treat love like a verb instead of a game to be played and won.

Hollywood doesn’t make as many movies about married people and long-term love stories. I guess new love sells more popcorn. That’s fine. I like those movies, too, but when the credits roll, I’d rather go home with married love. 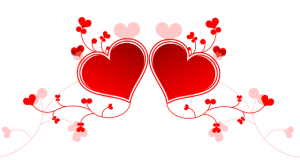 Long-term love is a lot like new love, only it’s been to war and back. It stays with you in the foxhole of what can sometimes be an ugly reality. It knows the real you and likes you anyway. It has seen you with the stomach flu and didn’t run away. Long-term love may not be as shiny, but it’s sturdy, solid and it’s the best kind of serene.

Is it a perfect system? Of course not. Even in movies, when things are too perfect, the story falls flat and the audience stops watching. Conflict is an inherent part of any life story.

But long-term love doesn’t play tug-of-war with your heart on the line. Even when I’m crazy mad at him, I know Tom and I are on the same side. We’re on the side of “us.”

From my heart to yours, Happy Valentine’s Day.