There are two times in a woman’s life when she needs an epidural to block the certain agony coming her way. The first is the day she gives birth to her sweet baby. The second is the day her sweet baby takes his first driving lesson.

Right now I’m thankful I had the good sense not to go through this experience alone. I enrolled our 14-year-old in a course at the Driving Academy of Northwest Arkansas. He completed a week’s worth of in-depth classroom instruction and now we’re in the midst of four private driving lessons with a certified instructor.

I rode in the backseat during today’s lesson, promising myself I would simply observe and pick up pointers on how a professional instructor coaches a new driver. 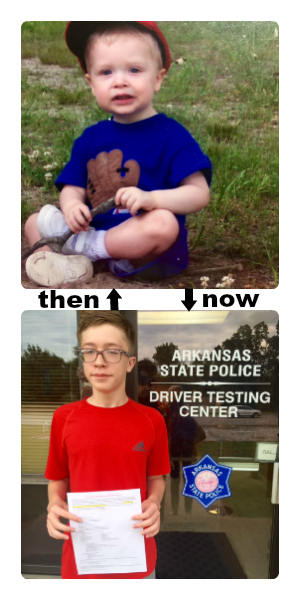 The problem is that I know too much. I’ve seen too much. Even though our son is now taller than me and has huge man feet, part of my brain still sees him as the toddler who tried to eat dirt. The 2-year-old who spun around in circles laughing until he got so dizzy he fell down. That part of my mama brain is having a hard time accepting the fact that he’s old enough to operate heavy machinery.

Was it really that bad? No, apparently not. Because our driving instructor, a wonderful young man named Ethan, wasn’t bothered at all. He said my son did well during the lesson, only making the common mistakes made by most new drivers.

But I suspect Ethan might have a super-human ability to keep his cool in tense situations. Perhaps it’s one of the prerequisites of becoming a driving instructor – that you have a calm, cool demeanor and the smooth, tranquil voice of a golf commentator.

I was struck several times by the sharp contrast between Ethan’s gentle guidance and the hysterical voice in my head which spent most of the 90-minute lesson silently screaming in the backseat.

Ethan: “….okay start slowing down and get ready to stop…good.”

Me: “WHY ARE YOU GOING SO FAST? YOU’RE DRIVING AT MACH SPEED! WE’RE BREAKING THE SOUND BARRIER! SLOW DOWN!”

Ethan: “…notice that the speed limit here is 35 and you’re about five miles over, so slow down to 35…good.”

I’m telling you, this guy could not be rattled no matter how many times our driver accelerated toward the stoplight. Meanwhile, I was sitting directly behind my “baby” driver, thankful he couldn’t see the way my face grimaced every time I bit my lip to keep from shrieking “Watch out!” He couldn’t tell that I was wishing the car was equipped with one of those airplane oxygen masks that drop out of the ceiling. At one point, my knees reflexively pulled up to my chest, as if I was curling into the fetal position and praying the airbags would save us all.

Thankfully, we have a few more lessons with even-keeled Ethan this month, and that’s good because the relationship between a parent and teenager is already fraught with tension and eye-rolling. If I had tried to do what Ethan did today, I can almost guarantee that the lesson would have deteriorated into a regret-filled episode of fury and tears, mostly mine.

That’s why it’s important that we have Ethan, the instructor-slash-buffer. He’ll be like the good doctor who keeps the parents from freaking out while he guides our baby driver onto life’s highway. I wonder if I could hire Ethan to ride along with my teenager until he turns 35. Does that sound doable?

If it’s not, I’m going to need that epidural right about now.