I don’t believe in reincarnation, but, if I did, I’d want to come back as my parents’ dog. 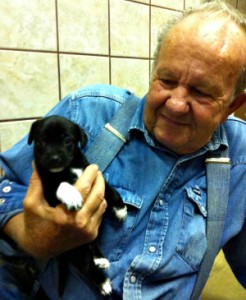 They adopted him four years ago, and he was a tiny thing – solid black except for small white feet. Mom and Dad named him Boots.

My theory is that, when parents raise their children and send them out into the world, the love and attention they once heaped on their kids doesn’t disappear. It has to go somewhere. All that energy transfers to something or someone.

Some empty-nesters spend the energy on travel. Some take up a new hobby. And some people, like my parents, transfer that parental love onto a dog.

Boots is what I would call a professional love sponge. His job is to soak up all that love and daily devotion and be the four-legged “kid” of the house. By all accounts, he does it brilliantly. I don’t want to say Boots is spoiled, but it’s hard to deny the evidence.

Exhibit A: Boots has his own recliner. It’s positioned three steps away from my dad’s recliner. On any given day, you can find both of them lounging in their chairs, watching The Weather Channel or listening to country music.

Exhibit B: Boots, the love sponge, has swelled to a size we’ll call “pleasantly plump.” When dad can’t remember whether or not he has fed Boots his breakfast, he errs on the side of feeding him again, just in case.

When Boots was a puppy, my parents worried about him having separation anxiety while they were away from the house. So they started a ritual wherein Boots gets a “going away treat” as they walk out the door. When they return, he gets another treat for waiting patiently. As you can imagine, Boots is more than happy for his humans to spend the day running errands because he has literally got them “coming and going.”

All the treats do have an impact, however. I don’t want to say Boots is fat, but we haven’t seen his neck in two years. We’ll just leave it at that.

Exhibit C: When Boots isn’t watching the news from his recliner or eating his second breakfast, he spends nights on his own blanket in the middle of my parents’ king size bed. Sometimes they scoot to the outer edges of the bed so as not to disturb his slumber.

If Boots needs to go outside on a rainy night to answer nature’s call, Dad goes with him, holding a flashlight and an umbrella over his precious head.

Last weekend, my parents took a trip out of town, so I was in charge of dog-sitting Boots the Beloved. We kept him with our dog Charlie on an enclosed (and air-conditioned) back porch, where he had access to a dog bed and one meal a day.

Boots wasn’t impressed. He stood at the door looking in at us as if we’d left him in war-torn Baghdad. “What? No recliner? No one brought me extra bacon from Waffle Hut? What is this God-forsaken place?”

After three days of slumming it at our house, Boots was rescued from his non-pampered purgatory. When he saw my parents again, he wagged himself into a frenzy as he celebrated their homecoming. He went home and sacked out in his easy chair, thankful to be restored to his rightful place in the universe.

For some couples, retirement truly does go to the dogs.