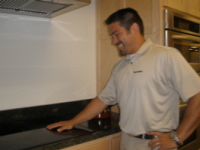 With curious children around, mamas have good reason to be worried about little fingers getting burned in the kitchen.

With that concern in mind, Gwen and I decided to go check out an induction cooktop — one that heats up and cools down within seconds — in action. We knew Metro Builders Supply had a 36-inch KitchenAid induction cooktop on the showroom floor so we headed over to try it out for ourselves.

When we saw how quickly a pan of hot water started boiling we were impressed. When we saw Aaron take the pan away and touch the element that had just heated that water to a rolling boil in 120 seconds — we were REALLY impressed.

It cooled down completely in mere seconds. Aaron even touched the edge of the burner when the water was boiling and it didn’t feel hot. These cooktops are a good way to get the even control of a gas cooktop without the flame.

Though pricey, and not compatible on top of an oven, this particular electric cooktop (Metro has various models, but this one happened to be a 5-element KitchenAid Architect Series II) heats up only when it’s in contact with magnetic cookware.

One cool trick to demonstrate this is to place a pan halfway on the burner and put ice on the other side — it won’t melt. You can have every burner blazing, but they won’t even be warm if there isn’t a metal pan on there.

Another perk: it has a “control lock-out” function you can activate to prevent the kids from accidentally turning on an element (in case you’re like me and always leave the spaghetti noodle pan on the burner until way after dinner).

One more plus: induction cooktops are also more energy-efficient than traditional models.

For more info on their various induction cooktops, call Dave or Aaron at Metro Appliances & More at 479-750-2200 or visit them online by clicking HERE. 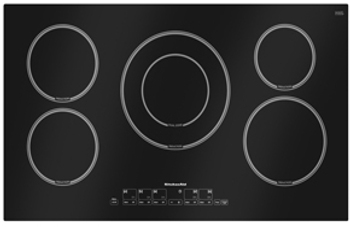