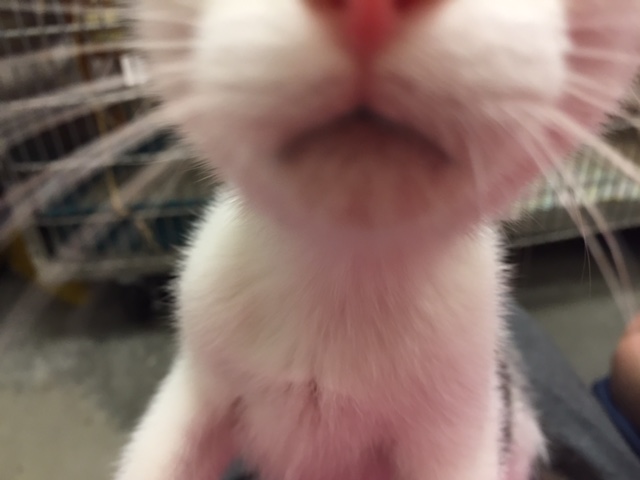 I’ve mentioned that Ladybug and I volunteer in the cat adoption area at the local PetSmart. In other words, we pimp cats.

When people walk by the cages, we shamelessly hold up the kittens or cats for them to see, even stooping so low as to hold up the feline’s furry paw to wave. We’re trying to pull them in, into the room behind the plexiglass where the cats can be petted and played with.

The first rule of cat selling (and fishing): Set the hook.

Once we get them into the room with the cats, we can work the real magic. Well, the cats can. We soundlessly coach them: 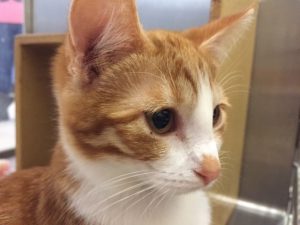 Reach out to the victim (um, the person visiting the cat adoption center) through the bars of your kitty prison. That reaching paw really pulls on their heart strings.

And the biggest thing: when the human picks you up, PURR. Purr like your life depends on it, because it does. Nuzzle the person, and make like Puss in Boots from Shrek with the big eyes.

As a PetSmart cat adoption center volunteer, I’ve met some really unique people. Like the guy who said his cat likes to ride the family’s pet tarantula around on his back. (Note: NEVER adopt a cat to this guy. Yep, there’s actually a black list, in case you were wondering.)

I’ve ticked off people who think they should be able to walk up and walk out the sliding glass doors  of PetSmart with a cat. Sorry, but there’s an application to fill out. The cats need homes, but they need good homes where they’ll be safe and cared for.

I’ve also been unwillingly cast into the role of therapist while volunteering. Once an engaged couple came it to look at the kittens and they each fell in love with a different one. The young woman cried at the prospect of not adopting her chosen kitten, but the young man held firm: his kitten would be their choice.

I tried to intervene, asking who got to choose their dog. The guy, as it turns out. I was starting to see a pattern. They ended up adopting the guy’s choice and I resisted the urge to tell his fiancée: “Run now, while you can! If he won’t budge on the issue of pets, imagine what he’ll be like when you two have kids!”

But I was just glad they adopted one of the cats. 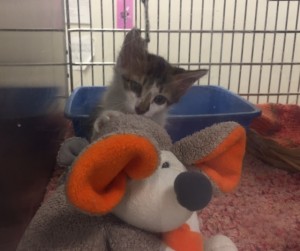 There are SO MANY. Every week there are new whiskery faces to fall in love with. My daughter and I call our volunteer time cat therapy and our blood pressure goes down while we’re there petting the kitties and giving them the love they crave.

Most have sad stories like being left behind when their people moved away, or being found in a dumpster or being trapped under a crumbling trailer, as was one of the kittens we took care of last weekend.

We can’t take all of them home, but we do what we can to visit with people about cat behavior, match-make humans and the cats up for adoption and give the kitties lots and lots of love.

One cat at a time.

One volunteer day at a time.

Now. Who needs a cat?