My 5-year-old son has moved away from Thomas the Tank Engine toys to wanting toy soldiers and plastic guns. I’m not really comfortable with him having “weapons” even if they don’t look super realistic. I’m afraid having those kinds of toys in the house will encourage him to be violent. My husband disagrees and wants to buy him a toy gun for Christmas. What’s your take?

MAVERICK: Lots of little boys like guns. They don’t have to like guns but don’t punish your child if that’s his inclination.

Heck, even if you don’t buy him a toy gun, he’ll likely grab a stick, or a ruler and turn it into one and run around pretending to shoot stuff. It’s what boys do.

Don’t panic just because your son is wanting to experiment with these drives. Males are hardwired to fight for and defend what they love. Even in the classic movie “A Christmas Story”, Ralphie imagines using his Red Ryder B.B. gun to fight off bandits much to the admiration of his family.

Giving a boy a toy gun no more fosters him to be violent than getting a little girl a Easy Bake Oven will make her a future doormat.

If you’re really concerned about his play you can include some simple rules.

Don’t even get me started on toy soldiers. The profession of soldier is an honorable one. While sometimes boys play can sound pretty nutty and gruesome, with attempts to mimic machine guns, and bombs and screams it’s all just play. It is male play but it is still play.

Let your husband lead in this. Say the boy can get a toy gun or toy soldiers if the father agrees to play with him.

Boys learn to become men by spending time with strong, male role models. Tell your husband if he’s certain the guns and toy soldiers won’t hurt the boy, you are certain playing with his dad will help.

GRAY: Throughout the centuries millions of children have played with various weapons. As a child I had a variety of pistols. My favorite was a replica flint lock that fired rolls of red popping caps. Has such play turned myself and innumerable scores of others into barbaric savages? No, it has not. Here’s why:

Kids play with toy guns because it’s a game, not because they’re practicing to become assassins. Just as children playing Monopoly don’t become slumlords, those playing Pin the Tail on the Donkey don’t grow up being animal abusers and children playing Candy Land don’t become morbidly obese, owning a toy gun isn’t going to turn you child into a bully or menace.

Personally my daughter prefers swords to guns and she never uses them to harm anything, not that she even looks particularly intimidating while wearing a tiara as she wields the plastic blade. Though the only toy gun she’s expressed interest in is a water pistol, she looks at them as a plaything and not with the connotations we adults ascribe to them. 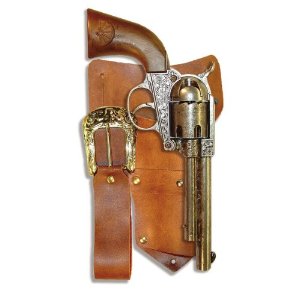 And I don’t think I should finish without a word of caution. If you own real guns you need to teach your child the difference and use your head about how you store them. To a child who isn’t educated, they may believe they’ve found a new toy. Nobody wants that scenario. Ever.

And as your son abandons trains for tanks, toy pistols and G.I. Joe figures, just know it’s the same steps your husband took when he was your sons age. Go on, take a look at your husband, because he’s the proof that toys are for boys, but don’t determine who he becomes as a man.

MICHAEL: I’m not a big fan of toy guns. That being said, I have no problem with real ones. At an appropriate age and under supervision. So I hear where you’re coming from.

I don’t know that you’re going to win this one though. It’s such a part of our culture and if you both aren’t aligned on this you’re going to have to negotiate some conditions. First, see if you can put him off another year. If not, set up ground rules for play.

I have two little girls and I’m very uncomfortable when they’re playing outside and their friends who are boys start playing with their guns. What makes me nervous is that one of these times they’re going to come out with a real gun. So make sure he’s punished when he points the gun at any living thing and hope he gets the point.