Something is wrong at my mother’s favorite grocery store, and she’s not going to take it lying down. She may even write a strongly worded letter to the company’s headquarters, and I bet it’ll be a doozy.

Mom, who is 76, is one of the few women I know who genuinely enjoys a trip to buy groceries. 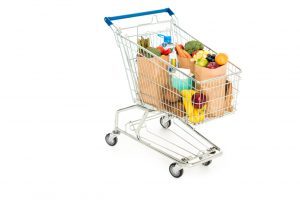 She likes to go alone and push her cart up and down the aisles, taking her time to see what’s new.

When the pandemic first struck and we all locked down, I insisted she let me order her groceries to be delivered to minimize her exposure to the virus. She agreed for the first three months. But then I caught her coming home one day this summer carrying plastic bags. She’d sneaked off to the grocery store like a teenager slips out for a forbidden party.

Grocery stores have had this magnetic pull on her for a long time. I remember in the early 1990s when a Walmart Supercenter opened in the college town where I was living. When I told Mom how enormous it was, she said she wanted to see it for herself the next time they came for a visit. When I lead her through those automatic doors and she got a look at it, she stopped and stared. “Wow,” she said. It was like watching the reaction of a kid seeing Disneyworld for the first time. We shopped the Supercenter for three hours that day, and she declared it magnificent.

When my parents moved from our small hometown to my city nine years ago, Mom finally got access to several of those magnificent Supercenters within easy driving distance. If she is not at her job or at home, it’s a solid bet that she’s at the store “picking up a few things.” But I’m afraid her relationship with our nearby Supercenter has hit a rough patch.

A few months ago, our Supercenter got rid of all traditional checkout lanes and replaced them with self-checkout lanes. Instead of the individual lanes we expect, it now looks like a giant racetrack ringed with smaller checkout stations. Those black conveyor belts where we used to unload our carts? Gone. The spinning circle of plastic Walmart bags? Vanished.

Everyone who knows my mother knows she’s laid back and not easily frazzled. It takes a lot of work to make her mad. But the day the checkout lanes disappeared from her favorite store? She was mad.

This is not one of those “can’t teach an old dog new tricks” situations. Mom may be in her seventies, but she also works a full-time job as a bank teller. She’s constantly using computers and learning new procedures at work. She figured out how to text photos on her iPhone. She even uses a disembodied voice named Alexa to wake her up in the mornings. That’s fairly high-tech for a white-haired “memaw.”

It’s less about the technology demands and more about the principle of the situation. Historically, navigating a ginormous store to find what you need and mentally calculating what you can afford have been the job of the shopper. The checkout lane was always the finish line of the experience. At that point, all you had to do was stand there pretending not to read the headlines on the tabloids. Or browse for gum and mints. Or try to resist buying a Snickers bar for the ride home. The checkout experience was the “cool down” after the grocery store workout.

But now that the lanes manned by cashiers are gone, the checkout experience is just a continuation of the work – only we’re not getting paid to do it. I’ve used the self-checkout enough times to know that even younger people who are tech-savvy often have trouble with it.

Where’s the barcode on this box? Did the scanner beep? Or was that someone else’s beep? Was that a double beep? Did it charge me twice? Have I already beeped this package or not? Will a security squad descend on me if I accidentally forget to beep something? How do I weigh the bananas? What’s an “item lookup”? Why am I sweating?

Sure, there’s a “help” button if you get stuck. And if you stand there looking around with a confused, helpless look on your face, one of the checkout area “lifeguards” will eventually spot you, realize you’re in over your head, and come to the rescue.

Mom said the last time she went there, one of the people who used to work a checkout lane came over to ask if she’d prefer to have someone check her out instead of doing it herself. She did prefer it. But no one wants to look like the person who’s either too intimidated or too lazy to wrangle the self-checkout station on her own.

I told Mom that perhaps this new Hunger Games style checkout arena is a temporary thing. Maybe the corporate folks are just testing the new concept to see how it goes. There’s a chance they’ll go back to giving shoppers the option to go through a traditional checkout lane with a real human who chats about the weather and asks if you found what you needed. I hope so.

But if not, I know of at least one Memaw who’ll be shopping for a new favorite store.