Those of us who have survived the toddler years know a thing or two about rage because we’ve seen it up close and personal. Even though my kids are tweens and teens now, I still vividly remember that tricky stage of development. It’s not called the “terrible 2’s” because of its healthy spirit of cooperation. It’s called “terrible” because you’re basically dealing with toddler tyranny. 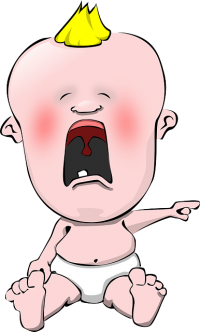 But the good thing about a 2-year-old is that his or her tendency toward irrational rage is balanced out by the attention span of a goldfish. When my 2-year-old pitched a fit, I’d act like I was fascinated by something shiny right outside the window. Or I’d turn on a silly song and start dancing. Soon the tiny tyrant would be peering out the window right beside me or shaking his diapered bottom to the music, forgetting all about what enraged him a few moments earlier.

When a kid turns 3 or 4, however, this diversionary tactic doesn’t work as well. An older toddler or preschooler has all the irrational rage of a 2-year-old but has much better follow-through skills. He figures that, even if he can’t outwit you, he can probably outlast you. (This is why all parents of toddlers need a great babysitter and gift certificates for massages.)

But the good news is that, usually by kindergarten, kids outgrow this stage – or so I thought. Lately, I’m not so sure. Is it possible that some toddlers get bigger but they don’t grow up?

One day last year, I cut out a strip of three news bulletins that appeared on the front page of the newspaper. Each one was about 50 words or less, and each report came from different parts of the country. But there was a common thread running through all three – rage.

Here are those news briefs, taken from a newspaper published on March 17th of last year.

“Haley Becker, 23, and Pauline Covine, 43, were cited for disorderly conduct for getting into a hair-pulling fight when Covine’s husband refused to move his pickup from a spot on a snowy street that Becker had just shoveled out, state police reported.”

“Djuan Bowers, 18, of Nashville, Tenn., a 17-year-old and a 16-year-old were arrested on aggravated assault and other counts on accusations of shooting toward a store because they got the wrong toppings in a pizza order, police said.”

“Bob Gualtieri, sheriff of Pinellas County, Fla., said a deputy was shot in the leg when he and other officers responded to a 911 call made when an argument over who should go buy doughnuts led a 24-year-old man to shoot his mother’s fiancé, killing him.”

Don’t let these bizarre reports distract you from the more shocking fact that almost all the people mentioned above are adults. Grown women pulling each other’s hair? A pizza topping tantrum with a side of gunfire? A doughnut disagreement that devolved into death? The people described here sound like toddlers with no impulse control, not people old enough to drive, vote and own a gun.

Given that we live in a time when it’s acceptable and even encouraged to express emotions as soon as we feel them, is this spike in rage a new phenomenon or just a more evident one? I don’t have the answer, but I do think it might help if we all took our “feelings” down a peg or two. It’s not that our feelings shouldn’t count for anything. They should. But that doesn’t mean they should count as EVERYTHING.

Feelings are, by their nature, changeable and fleeting. Our great-grandparents knew they weren’t entitled to a steady stream of good feelings, and they knew that annoyance, disappointment, anger and even profound grief would be part of their life experiences.

There are some things worthy of outrage – child abuse, mass shootings, racism, etc. But some things are just parking spots, pizza toppings or doughnuts. They’re small, fleeting things that should only trigger small, fleeting feelings that don’t get acted upon or expressed.

When we let feelings dictate our actions, we reduce ourselves to nothing more than giant toddlers who turn minor annoyances into a full-scale fit.

As a reminder for myself on tough days, I tacked a note to the bulletin board above my desk that reads, “It is what it is.” It’s a grown-up version of the rhyme I and so many other parents once chanted to our toddlers: “You get what you get, and you don’t throw a fit.”