One of my favorite Looney Tunes cartoons is the one where Bugs Bunny and Daffy Duck argue about whether it’s duck season or rabbit season. Elmer Fudd stands nearby with his shotgun, ready to fire on whichever rascally varmint loses the argument.

In a classic Bugs Bunny switcheroo, Bugs starts insisting that it’s rabbit season, which only makes Daffy insist that it’s duck season. He’s so determined to be right he grabs the barrel of Elmer’s shotgun, points it at himself and yells “Fire!” The gun fires straight at Daffy, blowing his duck bill backward on his head.

At our house right now, it’s duck season. Nobody is hunting ducks, but one member of the household is on a strict duck-only diet. Percy, the Persistent Stray Cat, who claimed us as her family two years ago, started scratching a few months ago. She scratched and scratched and scratched until she was driving herself and me nuts. I treated her for fleas but nothing worked.

The vet thought seasonal allergies were to blame, which made sense since I, too, was sneezing plenty during ragweed season. The vet 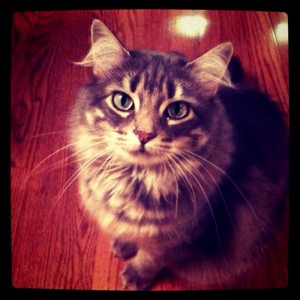 gave Percy a steroid shot, but the scratching continued and Percy’s skin was getting raw and crusty.

So I took her back to the vet two weeks ago, and this time the vet said we’d do a “food trial” to see if Percy is allergic to her cat food. She prescribed a fancy, prescription-only cat food made primarily of duck. Armed with an expensive bag of dry pelletized duck, I took Percy home and began the test.

Percy took one look and sniff of the new food, turned her head toward me and shot me an angry look that undoubtedly said “Are you kidding me? Where in the heck is my Meow Mix, woman?” And thus began Percy’s three-day hunger strike. She wanted her old food back, and she didn’t particularly care whether or not it made her skin itch like she’d rolled in Poison Oak.

I sympathized because who among us hasn’t craved something that’s no good for us? There are moments when all I want is a big bag of barbecue potato chips, even though I know it’ll do ugly things to my thighs.

On Day 3 of the food trial, I put some Starkist tuna on top of Percy’s no-frills duck food, hoping it would tempt her to eat. It worked. Percy loved the tuna, even agreeing to eat a few dry duck pellets underneath. After several days of the new tuna plus duck diet, she stopped scratching!

With the mission accomplished, I plan to now phase out the tuna and use only the vet-approved duck food. This morning I went downstairs to feed Percy, pointed toward her bowl of duck food and told her to eat. But she was waiting for tuna, which didn’t come. I went back upstairs and Percy followed close on my heels, loudly meowing her objections. When I climbed the last step, she wrapped her furry arms around my ankle and bit my leg!

“Percy! You bit me!” I yelled as I spun around to face her.

“Tuna season!” she seemed to silently yell back at me.

So here we are, just like Bugs and Daffy, at our own stand-off. I’ve inadvertently turned my housecat into a mildly violent tuna junkie looking for her next fix. I’ll have to go back to the vet and ask if there’s some sort of feline 12-step program for tuna addicts. On the bright side, the incessant scratching has stopped. But the cravings have just begun.