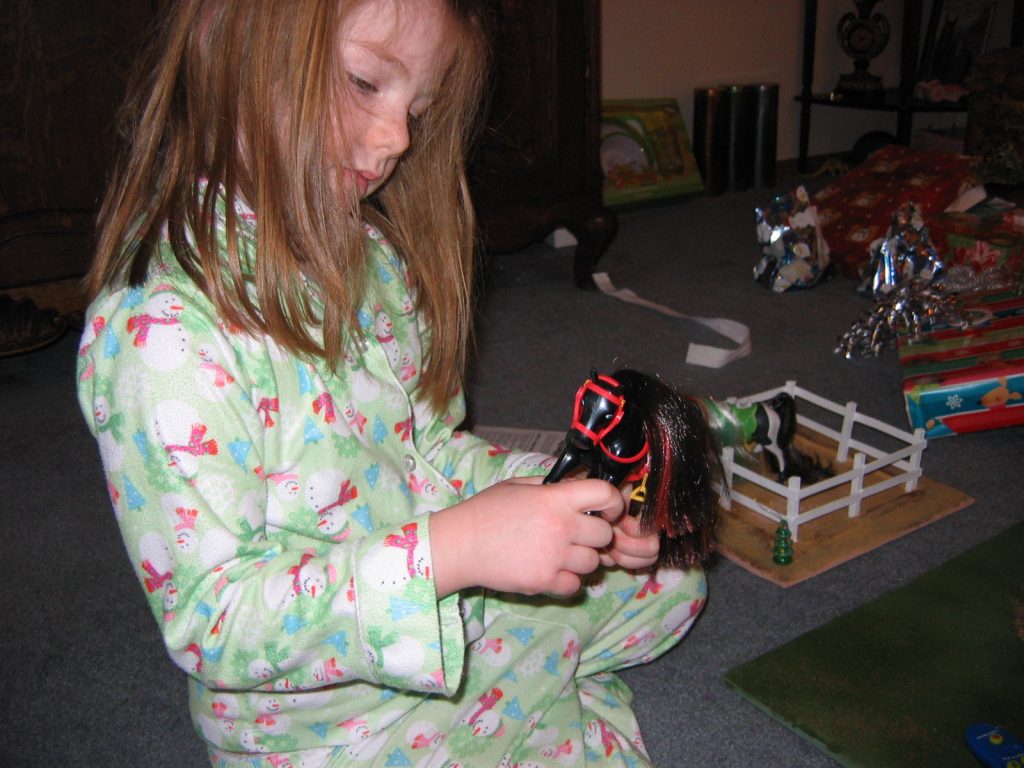 I had been dreading this day since our daughter’s first Christmas in 2002.

For nearly 10 years we’d side-stepped questions about  Kris Kringle’s existence with vague answers like, “What do you think?” and “Who said that?” if a classmate mentioned that they didn’t believe anymore. Well, we’d really only had redirect the conversation for the past few years.

John and I recently had a conversation about what we’d tell Ladybug if she point-blank asked. We agreed we should tell her the truth. Nearly 10 years and 4th grade is really a pretty good run, we told each other. (The picture above is from several years ago.)

Well, last week as Ladybug and I drove into the garage after school, she was chattering like a little squirrel about her day, then abruptly started talking about Christmas presents. Something in her tone alerted me to a Big Question and I turned off the car, my mind working overtime. Words tumbled over each other like an air bingo machine: What to say? What to say?

She started talking about one of her best friends who had found some presents in the closet with tags that read, “From Santa.”

This particular mom told her daughter that Santa had brought them a little early. Ladybug said, “Santa doesn’t come early.” 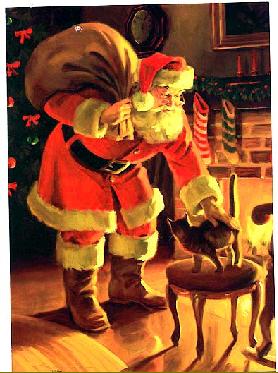 Then she told me that other “facts” didn’t seem to add up. Then she, gulp, straight-up asked me: “Mom, is Santa really real?”

After a few loooong seconds, I asked her, “If Santa wasn’t real, would you want to know?”

I told her I never want to lie when she asks me something specific.

Then she started sobbing. We got out of the car and when we made it to the living room couch, I pulled her onto my lap (as well as someone with a kid who’s only four inches shorter than her CAN pull someone into their lap) and let her cry. She said repeatedly, accusatory, “I want Santa to be real. Why did you have to tell me?!”

Then I launched into the mystery of Christmas and how I still listen for sleigh bells on Christmas Eve. I wanted her to have a graceful retreat back into believer-land if she wanted to take the trip. Just to ease into the whole idea.

Part of me really wished I had tried the beat-around-the-bush tactic one more time, just for a few more weeks and tell her AFTER Christmas. (“May is the best time to tell your kids this news,” one mom told me later.)

But a bigger part of me realized it was a fact of growing up, that I had survived the news and she would, too. Sometimes you just have to pull off the band-aid really fast.

Still, I was thinking about how the holidays had somehow now lost some of their luster. I don’t have younger kids, so the buck (Rudolph?) stops here. We’ve always talked about the true meaning of Christmas, but Santa was always so much fun to make cookies for and to try and stay awake for on Christmas Eve.

As her tears started to dry, she sat up and I swear I could see a light-bulb materialize above her head. Her eyes got extra wide.

“What about the Easter Bunny, and leprechauns and the tooth fairy?” she asked in desperation. “Are they real?”

I looked her in the face and gently said, “I think we’ve had enough truth for one day.”

Oh, and about The Elf on the Shelf? You don’t want to know.