This week, Susan and I have been getting Christmas shoe boxes ready to send to the orphans of this pastor’s mission. It’s an annual tradition at our church, but this year I did something a little different. I ordered a huge box of almost 400 toys from Ebay. They had belonged to a collector who had saved the prizes that come with children’s fast food meals over the past couple of decades. 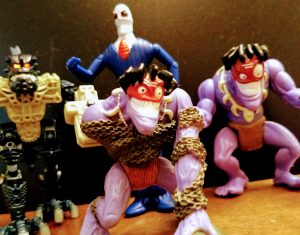 Indeed, after I gave the toy collection a closer look, I saw what she was talking about.  There were figurines that looked like monsters, demons, and representatives of the occult. There were fighting figures and angry figures and things that were just plain strange. We had to discard a great number of them. And it made me realize something about myself. I gave my own children a lot of violent things to play with, without giving it a second thought.

Dr. John L. Cash is the “Country Preacher Dad.” He was raised in Stuttgart, Arkansas, and has spent the last 32 years being a country preacher in the piney woods five miles south of the little town of Hickory, Mississippi. He’s a retired Mississippi public schoolteacher with grown sons, and is now a stay-at-home-grandpa with his grandson, Landon Cash. He and his lovely wife, Susan, live in a brick house in town (where the Christmas boxes are almost ready to ship.)  You can send him a note at brotherjohn@ilovechurchcamp.com.