34 ¶ Then Peter opened his mouth and said: “In truth I perceive that God shows no partiality.

Well, I was called away by duties from writing my devotion last week, but this week I’m back to my series about the purpose (and dark stories ) of the Old Testament. (Click here if you missed Part 1 of this series.) I have to tell you, I’m feeling a little overwhelmed today at the prospect of it all. I feel like I could write a book about this matter (or maybe some sort of encyclopedia.)

First of all, let me begin by saying I believe that the Bible is God’s Holy Word and that it is perfect, authoritative, and without error in the original manuscripts. That’s kind of an old-fashioned idea. But I wholeheartedly believe in the complete truth and trustworthiness of the Bible.

Perhaps the best way to explain this is with an illustration. In John 9:31 we read “We know that God does not hear the prayers of sinners….” Now to me, that’s a pretty sobering thought. Before I was saved, I prayed that God would give the gift of salvation. But if that verse is true, God did not hear me. And the truth is, I sin each and every day. If that verse is true, God is still not hearing my prayers because I am most certainly a sinner. And that verse is a part of the Bible. 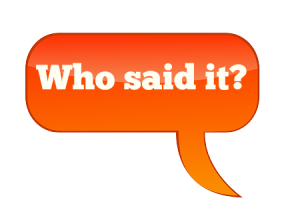 Those words were said by “the man born blind” who Jesus had just healed. He’s just a regular guy. He is NOT speaking under the direction of the Holy Spirit. And what that regular guy has said is utterly and completely wrong.

So, when you’re reading the Old Testament this week, ask this question: “In this passage, WHO is speaking; the Holy Spirit or man?” And as ever, man’s opinions don’t count for much. But we must always listen to and completely obey our Saviour and Lord.

Dr. John L. Cash is the “Country Preacher Dad.” He was raised in Stuttgart, Arkansas, and has spent the last 29 years being a country preacher in the piney woods five miles south of the little town of Hickory, Mississippi. (On week days has a desk-job at a public school, where he used to teach Latin on closed-circuit-television.) He and his lovely wife, Susan, live in the parsonage next door to the Antioch Christian Church (where this past week has been very pleasant and not nearly as hectic as the one before it.)  Their kids include Spencer (age 24), his wife Madeline (age 24), and Seth (age 20).