I caught him again last night. It was after 10 p.m. and the hallway was dark. His door was closed, which raised suspicion. My 9-year-old son doesn’t like to sleep with the door closed. So I crept up to the door in mama stealth mode and opened it quickly.

There he was, lying in bed with the covers pulled up to his chin. His eyes were wide open, and one look at him told me everything I needed to know. He’s just like his dad in that way. Any hint of dishonesty or mischief will broadcast itself across his face. So I pulled back the covers and there it was – a book quickly hidden away under his legs.

“You’re busted,” I said. “You were supposed to go to sleep an hour ago.”

“Awww, Mom. I can’t sleep and the book is just so good,” he said as he pleaded his case.

“If you don’t close your eyes and go to sleep right now, I’ll have to take all the books out of your room,” I threatened. “You need to get some sleep because you’re getting up early in the morning. Sleep is important.”

He grumbled a promise to close his eyes as I pulled his door halfway closed. As I walked back to my own room, I couldn’t help smiling at the irony of what I’d just done. I’d reprimanded my kid for reading too much and threatened to take his books away. I hope my parenting dilemmas are always this good.

Even though I know how important sleep is, it’s tough to be mad at Adam for reading when he should be sleeping. If some tendencies are passed along from parent to child, then I can only blame myself for this one. One of my favorite things to do is to get lost in a book and glance up to find that it’s already 2 a.m. Having a story unfold during the still, peaceful hours of the night is downright delicious.

Of course, it’s not fun the next morning when you’re a grouchy zombie, but that never seems to matter much the night before when you’re desperate to find out what happens next.

Our 7-year-old middle child, Jack, can fall asleep within 30 seconds of becoming horizontal, but he inherited his share of habits, too. Just like his dad, Jack is a carnivore who never met a burger, steak, hot dog or giant meatball he didn’t love. For him, eating is not just a necessity, it’s an event. He’s like a friendly little Tyrannosaurus Rex on a continual hunt for fresh meat in the refrigerator deli drawer.

But along with his carnivorous appetite, Jack also inherited his father’s sensitive stomach, which often objects to their extra-meaty menu. I’ve learned to pack plenty of Tums in my purse so I can dole them out to father and son when they need them.

And then there’s Kate, who turned our world upside down when she burst onto the scene four years ago in a blaze of pink. People sometimes say she looks like me. And as much as I’d love to believe I was ever that cute, I seriously doubt it.

But I do know of one thing for certain my daughter got from me – an uncanny knack for standing on her head. Keep in mind I never taught her this trick, even though I can still do it and could have turned pro if standing on one’s head had ever been considered an athletic feat.

My mother says I used to stand on my head all the time as a preschooler. She’d walk into a room and find my feet sticking up in the air as I balanced perfectly on my head while watching Scooby Doo on television. She enrolled me in a gymnastics class since I seemed to have a natural ability, but I never mastered any of the other acrobatics as well as I did the headstand. During the gymnastics recital, while the other little girls turned cartwheels and did backhand springs, I stood on my head – for nearly the entire recital – which my mother says was both impressive and a little weird. 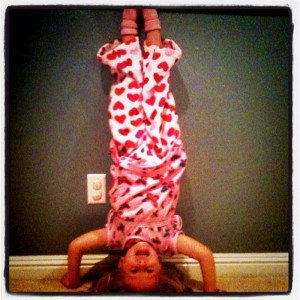 Fast forward 30-something years. I walked into the room one day a few months ago and found Kate’s skinny feet sticking up in the air where her head should have been.

“Look, mama! I’m upside down!” she said proudly, as if she had just invented the most glorious trick.

I grabbed my camera, snapped a picture and e-mailed it to my mother with the words “look familiar?” in the subject line. Apparently, the little apple doesn’t fall far from the upside-down tree.