I have a new paper shredder in my home office. It’s quite effective and works at lightning speed. The only drawback is that I have to feed it twice a day, take it out in the backyard so it can poop, and give it a bath when it gets smelly. The shredder also chooses for himself which things to shred and doesn’t wait for authorization from his supervisor – which makes me wonder who’s the real boss around here, me or him. 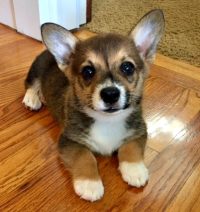 My furry little paper shredder, Cooper the Corgi, is nearly five months old now which means he has moved out of the newborn puppy stage and into the toddler stage. And in case it’s been a while since you’ve had daily interaction with a toddler, let me remind you. They are both adorable and tyrannical at the same time.

Last week, I walked from my office to the kitchen to get a glass of tea. When I came back, it looked like someone had thrown a ticker tape parade while I was gone. Cooper had found a packing slip in a cardboard box and decided it would be better if that document was in a hundred tiny pieces scattered around the room. It looked like an October snowfall had blanketed the floor.

“Cooper! What did you do?” I asked, exasperated by the widespread mess.

Completely satisfied with his work, he looked up at me with his dark brown puppy eyes and his satellite dish ears as if to say, “I have defeated the evil papers. You are welcome.”

I pointed to half a dozen puppy chew toys located in various spots around the room. “You have all these perfectly good dog toys. Some of them are even flavored like chicken! Why do you insist on chewing up paper?”

He cocked his head to the side, puzzled by my apparent lack of appreciation for his effort. He gave me a look that seemed to say, “Because I can. Obviously.”

Before now, I always thought that old cliché “the dog ate my homework” was ridiculous because, in my experience, dogs ate lots of things but homework wasn’t one of them. If I had been the type of kid who made excuses for not turning in homework, I would have come up with something more plausible than a dog eating algebra.

But then along came Cooper, paper shredder extraordinaire. Last night, I saw a flash of white in the corner of my eye and looked up just in time to pluck a worksheet out of Cooper’s fearsome jaws. I handed it back to my son, who’d left the room for a moment to find a sharper pencil. He stared at the bite marks on his science homework as I said, “Don’t leave your homework where Cooper can reach it because I assure you he will eat it. Then you’ll have to give your teacher the most clichéd homework excuse in the universe.”

Of course, the simple solution to this problem is constant supervision – which is something all toddlers – the two or four-legged variety – need. But have you ever tried to keep your eyes on someone or something constantly? It’s not easy to do, which is why toddlers throughout the decades have been emptying kitchen cabinets and drawing on their siblings with permanent markers.

Sometimes, when I need time to focus, I purposefully leave something in Cooper’s path for him to destroy. 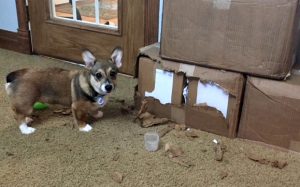 I’ve learned that a sturdy cardboard box will give a puppy nearly two solid hours of entertainment while he tears it into small chunks, and it’ll only take me about five minutes to clean it up. It’s not a bad trade if I’m on a writing deadline, and, if he happens to swallow a tiny piece now and then, cardboard is edible. (“Is cardboard edible” is one of several bizarre questions I’ve Googled since adopting a puppy.)

When he’s not obliterating boxes or shredding papers, Cooper loves to chase an ice cube across the kitchen floor. He’s learning to sit, lie down and stay, and he wags his whole body when the kids come home from school. Sure, he’s genuinely excited to see them, but I bet he is also sniffing their backpacks – just waiting for a chance to steal their homework.