By Jackie, the “Proud to be an American” music mama

If you’ve still got a case of Olympic afterglow, or if you’re enjoying this season’s fascinating presidential race, then this playlist is for you. It’s got red, white and blue all over it and is sure to inspire the patriot in all of us. (We found the cool American flag skin for your ipod at skinthepod.com.) Enjoy your tunes, ladies. 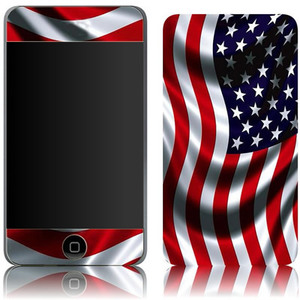 American Woman, by The Guess Who

God Bless The , by Lee Greenwood

American Woman, by Lenny Kravitz (repeat of the first song , but oh-so-awesome)

the Beautiful, by Ray Charles

United We Stand, by Brotherhood of Man

One Moment in Time, by Whitney Houston

Chariots of Fire, by Synthesizer Syndicate

I Believe I Can Fly, by R. Kelly

How Do You Like Me Now?, by Toby Keith

Courtesy of the Red, White, and Blue, by Toby Keith

Did we miss one? Post your favorite patriotic song by clicking below on the word “comment.” The Music Mama posts a great new playlist on the first of every month.