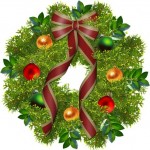 I bet, no matter where you are, or what you are doing, you are merely a stone’s throw away from hearing Christmas carols float through the air and seeing the flair of festive holiday décor strewn over every inch of stores, restaurants, town squares and homes.

Even some parks bear the evidence that the Christmas season has definitely arrived. It’s that time of year when weekends begin booking up with holiday parties, kitchens are filled with the smells of cinnamon and pumpkin spice, and people begin scurrying around for last minute gifts. The Teenagers become fidgety, waiting for the last day of the school year to come, Children anxiously await the arrival of the Big Man, and families begin piecing together the patchwork experience of trying to make it to everyone’s family gathering.

While these things bring happy memories and feelings of excitement to many, it’s sometimes difficult to not feel like a complete scrooge when a loved one is so far away without hope of a joyous reunion just in time for Christmas. I will never forget Jason’s first Christmas away. I struggled to put on a happy face so as to not ruin everyone else’s holiday experience.

Everywhere I turned people were talking about all the neat things their families were going to do and all the wonderful presents that would be exchanged and all I wanted to say was “Bah Humbug”! When they asked me what I was going to do, I forced a smile and said “Well, Jess and I will probably just hang out at home.” The disappointment that came across their faces was obvious. But it was no fault of their own, it’s just how things were.

I reluctantly went through the motions of putting up a tree with minimal decorations just so Jess would at least get to do that much. He was about a year old at the time so I didn’t know if he would actually really remember.

I missed Jay so horribly that first year that it really was a struggle to try to “celebrate” anything for fear of feeling guilty-it was not fair for me to experience joy while he was in such a bad place. Finally, one day about 3 weeks before Christmas, I woke up one morning and decided that no matter what, I would simply make this about Jess and not about us not being together. That poor baby deserved to experience a real Christmas just like every other kid out there! Besides, Jay deserved to try to enjoy this as much as I did so I began working on a care package.

That night I made a list of all his favorite things, and then found some pictures of past Christmases. I picked out a few songs that really expressed the way I felt, and then began piecing it all together. One song that seemed to sum it all up is called “Sending you a little Christmas” which is basically about sending a care package to a loved one who can’t be there for the holidays. It is by far one of my favorites-just awesome! (Click here to listen to part of this beautiful song.)

Then, I managed to make a stocking out of material with an ACU print and filled it with his favorite (non-melting) treats, hot chocolate, and peppermints. I made sure to send enough for all the boys he hung out with so that no one felt left out.  Then I made a video tape of Jess playing around the tree and at the end of the video, I sat the camera down so that I could talk to it and wrap presents at the same time.

I talked to that silly camera as if it were a person and told him how crazy it had been and what had been going on in town and with the families so he could be a part of the season too. And honestly, as silly as it seems, I felt ten times better after making that tape! I packed it all up in a postal service box after I wrapped the inside with wrapping paper and put it in the mail the next day!

While changing my mind set helped, it was still hard to be happy without feeling guilty which was difficult for many people to understand. But I was surrounded by friends and family who cared about us and kept pulling me out of my home to do things, even when I really felt like staying in. They kept me involved in life and for that, I am very grateful!

I have to say, as much as I missed him and hated that he was so far away, I was still so very thankful to have him and Jess that they became my reason to celebrate. Luckily I was able to find a brighter side and ran with it. To this day, of all the things I sent overseas to Jay, his favorite thing was that video tape!  He said he actually did feel like he was a part of our Christmas that year, even though he was so far away.  I suppose for me, that means “Mission Accomplished”!