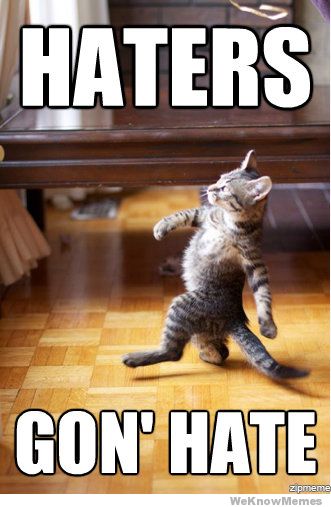 Germany once said, “This is most certainly true.”

So, parents, get ready. “The haters” are going to “hate” on your children. If it hasn’t happened yet, it’s going to. Be prepared.

Let me give you an example of what I’m talking about. When Seth was in middle school, he became a cigarette smoker. Now I’ve never been a smoker. I tried it once when I was a kid. I took a long drag off of a “Lucky Strike” (filtered), and instantly the interior of my respiratory system broke out in spots. I’ve never smoked another one. That first cigarette was plenty.

The same thing happened to his mother. Susan tried one cigarette, and that was enough to last her for the rest of her life.

But when Seth was in 5th grade, some big boys offered him a cigarette. He lit it up, smoked it, and enjoyed it very much. He told me that after that first time, he smoked whenever a cigarette was offered or was available. I guess smoking just agrees with some people more than others.

Now, as you might imagine, this wasn’t something his mom and I had planned for our youngest child. We always talked to our boys about the danger of lung cancer. And we tried to set a positive example for our children. We never had a conversation in which we said, “Seth, you’re going to be turning 10 years old soon. Your mom and I have been talking, and we think it’s about time we bought you a Bic lighter.” (Just sayin’.)

One day a man, who also had a teenage son, walked up and said this to me: “I saw Seth walk behind the gymnasium with one of Spencer’s friends. I’m glad the older boys take up time with him.” That’s what he SAID. But from his tone of voice, I knew the meaning of what he was trying to convey. What he MEANT was, “Seth is a hoodlum. I saw him smoking behind the gym.”

Well, this is where the “be prepared” part kicks in. I answered with the first thing that came into my head: “I would imagine that Seth went behind the gym to smoke a cigarette. I think Seth smokes Camels-without-filters-in-a-crushpack. He’s a very tough little kid. We wish he didn’t smoke, but he does it anyway. You know how it is. Your son is a smoker.”

(Note to the reader: Everyone in a 100-mile-radius had seen this man’s son light up. Honestly, the kid used a 3-pound-coffee can in his car for an ashtray.)

Later on, as I was recounting this story to my older son, I said, “Spencer, it’s the oddest thing. After the man said what he did, I heard a roaring sound in my ears. It was such a thunderous thing that I was afraid everyone in the room could heard it.” Spencer (who was wise beyond his years and also knew the young smoker) said, “Dad, I know what it was. It was the sound of all the truth being sucked out of the room.”

This story still makes me mad when I think about it. (Susan just proofread this story. She said she would not have been so pastoral in her reply. If the man had said it to her, she would have turned into Yosemite Sam and started shooting the place up. But I digress.)

People who think your kids are always bad and that their kids are always good are the worst — because those parents are stupid, and it’s always a lie. But I tell it to you because you’re going to go through a similar situation some day. There are people in this world who insist on pointing out the unpleasant realities in your life. The best thing you can do (in my opinion) is to tell them the truth. Beat them to the punch line. It ruins all the fun for the haters in this world.

There’s one more thing to realize. The haters who insist on pointing out the unpleasant realities in your life often refuse to tell the truth about their own situations. In that case, your strategy is different. Don’t point out to them that they’re lying. It’s quite enough just to know the truth in your own heart.

There’s an ancient Jewish story about a king who had a contest to figure out the “strongest thing in the world.” And at the end of the story, the winner is truth. The older I get, the more I believe that. Most of all, I remember that Jesus said that God’s Word is Truth.

So, parents everywhere, get ready for the haters. There are just three things to remember:

3. And most of all, believe the truth.

Dr. John L. Cash is the “Country Preacher Dad.” He was raised in Stuttgart, Arkansas, and has spent the last 29 years being a country preacher in the piney woods five miles south of the little town of Hickory, Mississippi. (On week days has a desk-job at a public school, where he used to teach Latin on closed-circuit-television.) He and his lovely wife, Susan, live in the parsonage next door to the Antioch Christian Church (where the Preacher’s son, Seth, is no longer a smoker because it gives him a migraine.) Their kids include Spencer (age 23), his wife Madeline (age 23), and Seth (age 20).