If you’re old enough, you may remember a TV commercial that featured a cartoon owl in a tree who answers a little boy’s question: “How many licks does it take to get to the Tootsie Roll center of a Tootsie pop?”

Lately, I’ve been asking myself a similar question about the newest dog in our family: “How many throws of the tennis ball does it take to wear out a dog who likes to run?” (Mac the Goldendoodle, still has the kind of puppy energy that rivals a toddler who has eaten three too many cupcakes.)

I’m not sure I’ve found the answer to the question yet, but the research is fun. People say, “a tired dog is a good dog,” and I’ve found that to be true. A sleeping dog is a dog who doesn’t attempt to steal wrappers out of the trash can, or disembowel his stuffed dog toys, or play tug-of-war with a sock from the laundry hamper.

During my daily attempt to answer the tennis ball question, I’ve been watching the

fascinating pack politics that have developed now that there are four dogs using the same backyard. Certain roles have emerged.

Charlie the Beagle, who is the oldest of the pack, appears to be the top dog but also the “cranky old man” of the group. He’s painfully aware that the new kid in the group runs faster than he does. When he starts to get tired of chasing the ball with the other dogs, he stands around doing the signature barks and bellows of a hound dog. Sometimes he even pulls his thin doggie lips back to show a few teeth and remind the young ones who’s in charge.

Cooper the Corgi has the most clearly defined role of 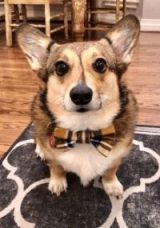 the group. He’s the “fun police.” Because he’s a herding dog, he cares far less about the tennis ball than he does the fact that there are three other dogs running willy nilly around the backyard. This kind of canine chaos drives him crazy, which is why he barks his displeasure the entire time he’s running alongside the other dogs who are chasing the ball.

Then there’s Freckles, a Sheltie mix, who lives with my parents in a separate part of the house. She’s the only girl of the group and wicked smart. And as with most family gatherings, it’s the girl boss who decides how things go. When another dog gets to the

tennis ball first, the princess voices her displeasure with rapid-fire, high-pitched barking which, roughly translated, means this: “Give me that ball right this second or I’ll bark in your face.”

Finally, there’s Mac, the new Goldendoodle, who’s training to be our daughter’s service dog. He’s got young dog energy but is also the shaggy peacemaker of the group. He’s the big, goofy kid who just wants everyone to have fun. He’s the only dog I’ve ever seen who manages to smile even while holding a large ball in his mouth.

Even though he’s the fastest of the group with the longest legs, he often lets one of the other dogs get to the tennis ball first and then gallops alongside him during a victory lap. After chasing the ball 10 times, his long pink tongue lolls out the side of his mouth, and he drops to the ground to roll on his back in a shady spot of grass. 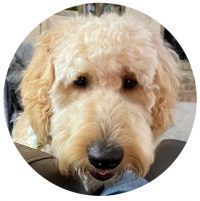 When Mac does decide to get the ball first, he doesn’t bring it back to me. Instead, he drops it and rolls it toward Freckles, the way the dog in the Lady and the Tramp movie rolled a meatball toward the girl dog. Then Freckles scoops it up without a backward glance and claims full credit for the fetch when she drops it victoriously at my feet.

Watching all four dogs together looks like this: Mac chases the ball. Charlie chases Mac. Freckles chases Charlie. Cooper chases all of them in a desperate attempt to play traffic cop. It’s a barking mass of furry fury, wagging tails, panting tongues, and one dirty yellow ball. The backyard has never been this much fun.